It's Snow Way to Run Democracy 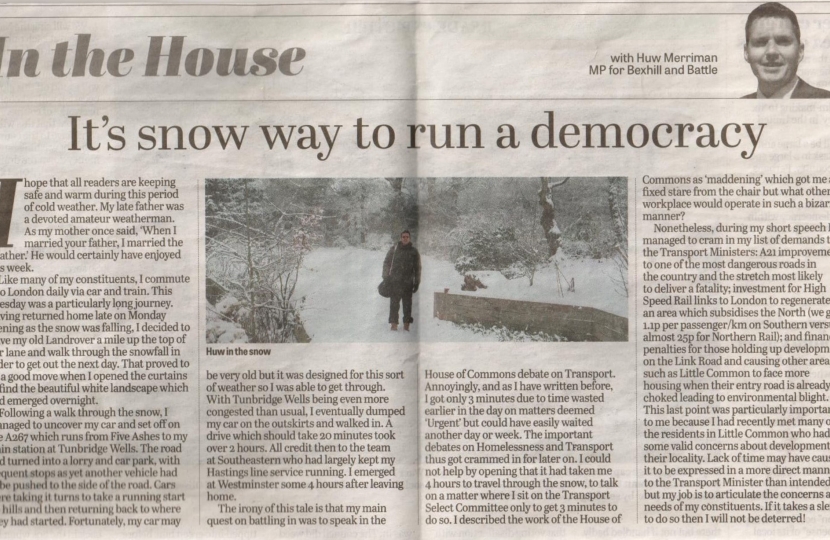 I hope that all readers are keeping safe and warm during this period of cold weather. My late father was a devoted amateur weatherman. As my mother once said, 'When I married your father, I married the weather.' He would certainly have enjoyed this week.

Like many of my constituents, I commute into London daily via car and train. This Tuesday was a particularly long journey. Having returned home late on Monday evening as the snow was falling, I decided to leave my old Landrover a mile up the top of our lane and walk through the snowfall in order to get out the next day. That proved to be a good move when I opened the curtains to find the beautiful white landscape which had emerged overnight.

Following a walk through the snow, I managed to uncover my car and set off on the A267 which runs from Five Ashes to my train station at Tunbridge Wells. The road had turned into a lorry and car park, with frequent stops as yet another vehicle had to be pushed to the side of the road. Cars were taking it turns to take a running start up hills and then returning back to where they had started. Fortunately, my car may be very old but it was designed for this sort of weather so I was able to get through. With Tunbridge Wells being even more congested than usual, I eventually dumped my car on the outskirts and walked in. A drive which should take 20 minutes took over 2 hours. All credit then to the team at Southeastern who had largely kept my Hastings line service running. I emerged at Westminster some 4 hours after leaving home.

The irony of this tale is that my main quest on battling in was to speak in the House of Commons debate on Transport. Annoyingly, and as I have written before, I got only 3 minutes due to time wasted earlier in the day on matters deemed 'Urgent' but could have easily waited another day or week. The important debates on Homelessness and Transport thus got crammed in for later on. I could not help by opening that it had taken me 4 hours to travel through the snow, to talk on a matter where I sit on the Transport Select Committee only to get 3 minutes to do so. I described the work of the House of Commons as 'maddening' which got me a fixed stare from the chair but what other workplace would operate in such a bizarre manner?

Nonetheless, during my short speech I managed to cram in my list of demands to the Transport Ministers: A21 improvements to one of the most dangerous roads in the country and the stretch most likely to deliver a fatality; investment for High Speed Rail links to London to regenerate an area which subsidises the North (we get 1.1p per passenger/km on Southern versus almost 25p for Northern Rail); and financial penalties for those holding up development on the Link Road and causing other areas such as Little Common to face more housing when their entry road is already choked leading to environmental blight. This last point was particularly important to me because I had recently met many of the residents in Little Common who had some valid concerns about development in their locality. Lack of time may have caused it to be expressed in a more direct manner to the Transport Minister than intended but my job is to articulate the concerns and needs of my constituents. If it takes a sleigh to do so then I will not be deterred!