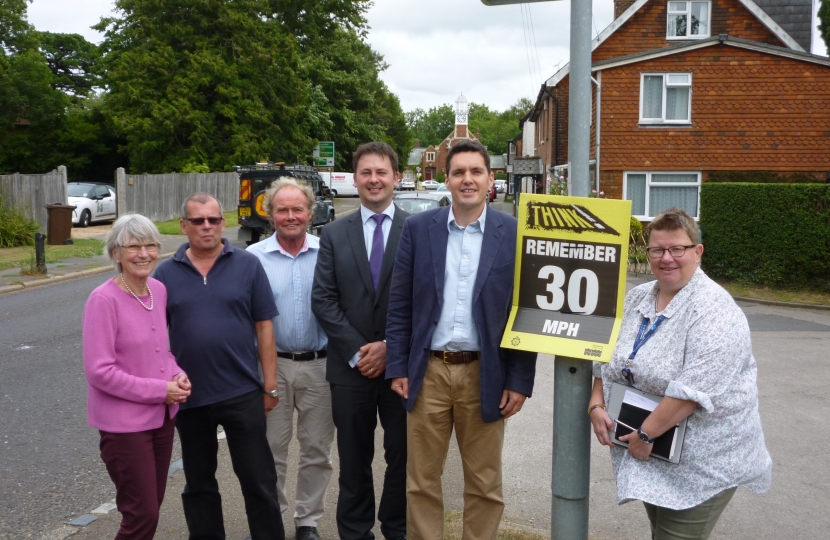 Huw Merriman, welcomed long-overdue safety improvements for the A21 in Hurst Green when he chaired a meeting of locally-elected representatives and Highways England at Hurst Green Village Hall recently.

Felicity Drewett of Highways England and Dan Cavaliere of Balfour Beatty Mott Macdonald told local representatives that a solution for the long-awaited traffic calming measures for Hurst Green would start to be implemented this month. A new speed limit of 50mph will be introduced before southbound traffic reaches the Coopers Corner junction with the A229 along with village gates for Swiftsden, new road markings and interactive signage planned for 2016. All these measures are aimed to improve driver behaviour and lower speeds before entering the village.

However, there was more good news for local campaigners as Highways England confirmed that design funding had been set aside to develop a safety scheme that would see the installation of average speed cameras along this stretch of the road. Detailed designs will begin this September and once completed further safety measures could be put in place, subject to funding being available for the delivery of the proposed scheme. The design brief will also include other small scale engineering measures aimed at supporting efforts for improved driving behaviours, compliance with speed limits, and if possible better provisions for the communities along the A21 e.g. footpaths, road surfacing and street lighting. A similar scheme was implemented on the A9 in Scotland where road accidents reduced were by over 50 per cent in the first year.

Speaking in Hurst Green Huw said “Since my election to Parliament, I have made the A21 one of my top priorities as it is an essential route for local people and vital to our local economy. I welcome these proposals from Highways England which will make the road safer for local communities like Hurst Green. Highways England’s other planned safety measures will help further improve road safety whilst reducing congestion and journey times.

“I look forward to working closely with Highways England and local representatives on these proposals to ensure that they work for local communities. I hope that we will see a significant reduction in collisions which will undoubtedly save lives and the A21 can shed its reputation of being one of the most dangerous roads in Britain.”