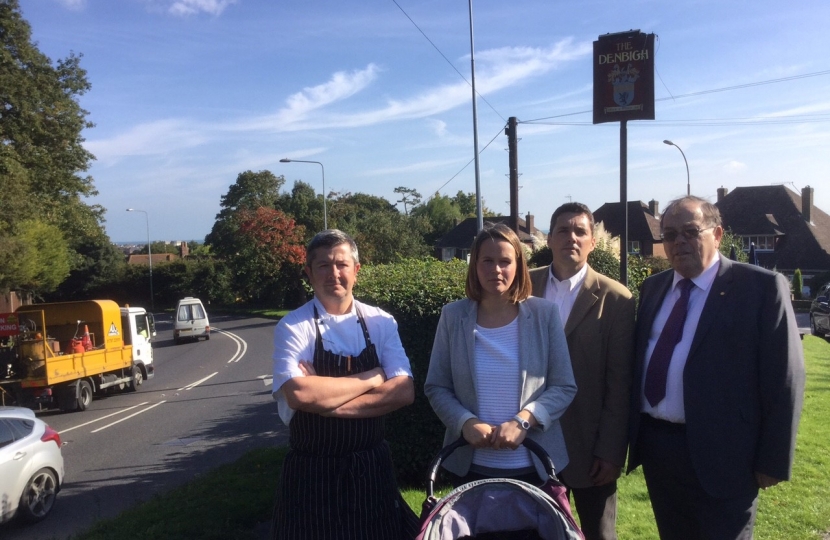 Huw Merriman, responded to an appeal by local residents and the Denbigh pub owners to help make the A259 Little Common Road a safer road for everyone. The need to improve road safety for pedestrians and motorists is more critical than ever, after two serious traffic accidents blighted the same spot in just one year.

Huw Merriman and County Councillor Stuart Earl witnessed first-hand the difficulty of crossing the road as local resident Naomi Scully experienced a near miss with a car whilst attempting to cross. Mrs Scully commented "The road is simply impossible to cross on foot for at least half a mile, you have no option but to run and keep your fingers crossed, not easy if you are elderly or have young children. There is no provision for crossing on foot and yet this stretch of road houses two bus stops and Broad Oak Park, something has to be done soon."

Residents cited the speed limit as being a fundamental problem, in particular a 40mph stretch on a dangerous blind bend near to the Denbigh Pub, which has seen numerous serious incidents over the past few years. Pub Landlord, Shaun Gibbons has witnessed many accidents outside his pub and fears that a fatal accident maybe inevitable unless action is taken soon. He suggests that the unique features of this stretch of road, including the camber, angle and blindness of the bend make it particularly dangerous.  He said "As a father of four young children I am very concerned as I watch them attempting to cross the road to catch the school bus.”

Following the visit, Huw said “For residents who live on this road, crossing it is a real danger. The path disappears where the road straightens out and there are three lanes elsewhere. I am urging Highways England to put in traffic calming and deliver a traffic island or extend the footpath before another accident occurs. This is an incredibly hazardous road for residents and it needs to be safer.”

Residents’ hopes were raised earlier this year when the Highways Agency (now Highways England) bid for funding to conduct a user study into the road, however funding was not granted on this occasion.  Residents have been advised that the more people requesting improvements will increase the likelihood of something happening.  An online petition has been launched, to sign go to the Denbigh's Facebook page and click on the link http://www.ipetitions.com/petition/reduce-the-speed-limit-on-little-common-road . Or, to sign in person visit the pub.