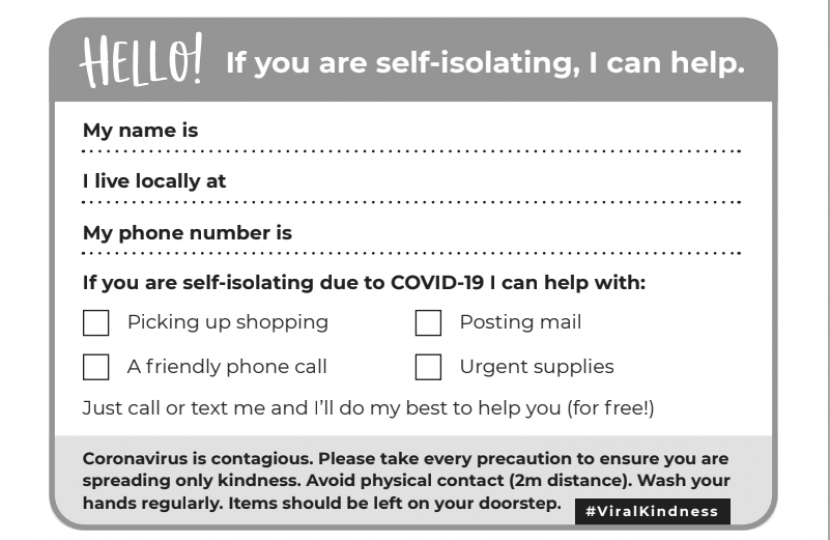 Bexhill and Battle constituency MP, Huw Merriman has praised local residents for their kindness and support to their neighbours and friends during the current coronavirus crisis.

Local Facebook groups have already been formed in Bexhill and Battle offering help and support to residents who have been advised to avoid social situations or self-isolate.  The Facebook organisers are hoping that the growing number of volunteers will be on hand to offer friendship and practical support to those who cannot leave their homes over the coming weeks. In Bexhill the Facebook group is called Bexhill Emergency Action Team and the Battle group is called Battle Emergency Action Response.

Huw said “At these critical times, communities really do pull together to support each other. It’s great to see that these Facebook groups have been set up to help coordinate the efforts of volunteers in Bexhill and Battle who want to help their neighbours through this crisis. These group members are growing rapidly by the day demonstrating how much people want to help each other, in stark contrast to those over-buying essential items in the local supermarkets.  I want to publicly thank those who have set up these groups which will help people get through the difficulties and challenges of isolation.  I shall be volunteering to help myself.

“I have also contacted all the district, town and parish councils in the area to see what I can do to help the communities they serve.  I am sure that they will all be wanting to help these community-minded local residents in their efforts to support each other.”