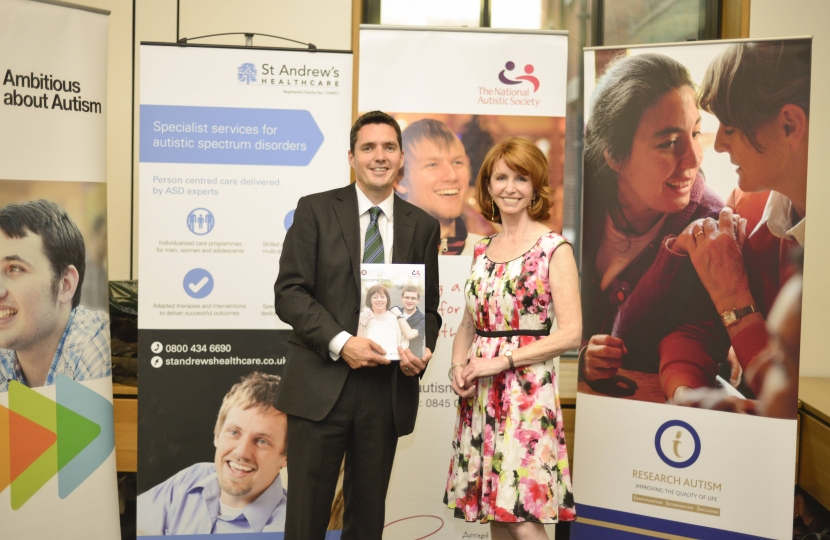 On Monday 29 June, at a reception at the Houses of Parliament, Huw Merriman MP, a member of the All-party Parliamentary Group on Autism (APPGA), pledged to promote more autism awareness in Bexhill and Battle.

Huw met local families and heard moving testimonies from people living with autism, a lifelong condition which affects over 3,000 people in every Parliamentary constituency.

The event was attended by nearly one hundred Parliamentarians and President of the National Autistic Society, Jane Asher, who said:

“Awareness of the word autism has increased dramatically since I first became involved many years ago, but understanding of this complex condition is still desperately low, that’s why I'm very grateful that so many Parliamentarians came to the event.

“Parliamentarians have the power to make a real change in the lives of those with autism by helping us to spread understanding among their local communities. I do hope they will work with us in trying to make the world a more welcoming place for those affected and their families."

“I am delighted to have been elected Chair of the All Party Parliamentary Group on Autism, a cross-party grouping of 200 MPs and Members of the House of Lords. There are over 3,000 people in each constituency affected by autism and it’s crucial they all get the right support.”

“I was impressed and moved by what I heard today from people living with autism.  More than 1 in 100 people in the UK have the condition and many have battled to get their needs identified, diagnosed, understood and then met.

“We heard how negative public attitudes and misconceptions about autism can harm families and individuals and limit their opportunities.

Since my election I have met constituents with autism and their families. I know just how hard some of them have had to fight to get the support they need. This shouldn’t be a battle for anyone.  I plan to actively promote more awareness in Bexhill and Battle to improve access to public places, employment and services. This will enable more people living with autism to play an active role in their community and to achieve their full potential.”