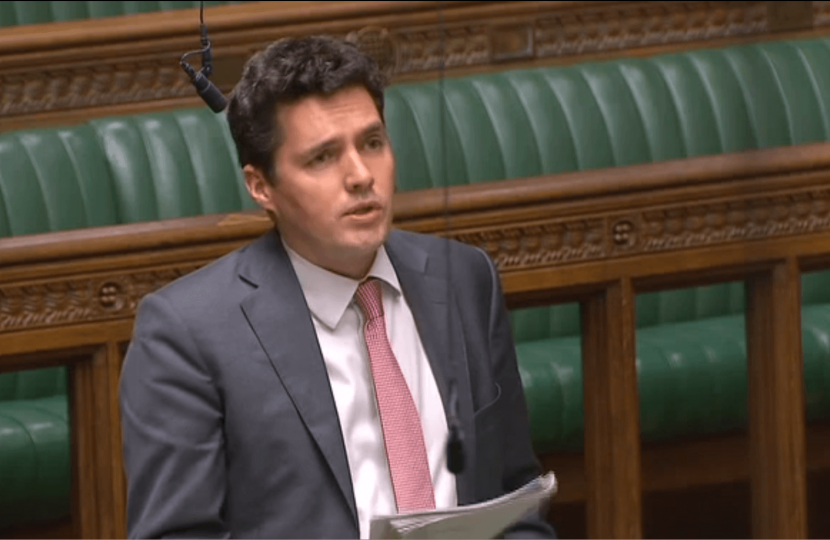 Today in the chamber, Huw spoke in the debate on Economic and Fiscal Outlook. You can watch Huw's speech here: https://goo.gl/o5yDYk and read below.

It is a great pleasure to speak in this debate. Section 5 of the European Communities (Amendment) Act 1993 requires Parliament to debate the content of this report on the ​UK’s economic and budgetary position. It is pleasing that although the UK has voted to leave the European Union, we are still complying with our obligation to submit the report.

Via the EU (Withdrawal) Bill, we are enshrining in law the rights and obligations that emanate from our EU membership. We are building with the European Union a new relationship, which I very much hope will allow our constituents to trade with, work in, study in and visit the EU. Rather than turning our backs on the European Union, we are building a new chapter of our working partnership and friendship, albeit on different terms—on our own terms—which will, I am positive, enable us to maintain our positive relationships in mainland Europe.

We are debating the Government’s assessment of the UK’s economic and budgetary position—a position that we have developed since taking office in 2010. Interestingly, while I was researching our economic position, I came across a page on the BBC website from 2010. Boxes on the right hand side of the page contained our key economic indicators, which in 2010 were as follows: UK economic growth would slow to 0.2%, UK borrowing would hit £163.4 billion, UK unemployment would increase to 2.5 million and UK inflation would rise to 3.4%. Those were the key statistics, as reported by the BBC, as the Labour Government left office.

Fast forward to 2018 and—of course, we still have more to do—growth is projected to rise by 1.5% this year, UK borrowing fell to £42.6 billion during the last financial year, UK unemployment has fallen to 1.4 million and UK inflation fell to 2.5% last month. So if Labour Front Benchers want to talk about how things look now compared with how they looked in 2010, those are the key figures that they need to consider. [Interruption.] From a sedentary position, the hon. Member for High Peak (Ruth George) mentions debt. The UK’s total debt is still too high, but we have reduced the amount being borrowed each year from 9.9% of GDP when Labour left office to 2.6% now. We still pay £50 billion a year on our overdraft, and that is far too high. It is larger than the schools budget, and it needs to come down.

It is vital that we do not confuse reducing the deficit with reducing the debt. Will the hon. Gentleman confirm that according to the OBR’s current forecast, the debt will not start to reduce until 2027 at the earliest? Does he think that that is good enough?

If we do not reduce the deficit, we will ultimately never reduce the debt. In January we had a surplus for the first time, so we are getting there. As I say, however, the debt is far too large and needs to be reduced. I applaud the steps that the Government are taking to adopt a balanced approach, whereby we invest in our public services but get the debt down.

The debt causes me a huge amount of concern, because the interest bill will be paid not by my generation or those above me, but by the young. If Labour is serious about adding an extra £100 billion to the debt, the younger generation will be forced to pay back an extra £8 billion a year in interest.​

It should not be forgotten that we have focused resources on key public spending commitments, such as health and increasing the amount we spend on the disabled. Opposition Members criticise us for the size of the debt, but when push comes to shove the austerity years, as they are often portrayed, have actually seen spending decreases at about the same rate as those advocated by Alistair Darling in the 2010 Labour party manifesto, so it is either one thing or the other.

My main point on how our economy is working is the fact that an extra 1 million people are now out of unemployment, compared with the last year of the Labour Government. That is crucial. Not only are those people paying into the economy, but they have opportunity, aspiration and hope. That was lost to many people when, yet again, the Labour Government left office with more people unemployed than when they had entered it. We have taken millions out of income tax by lifting the personal allowance from £6,500 to £11,850, reducing bills for 31 million people who still pay income tax. We have introduced the living wage, which will increase pay for 2 million people. One third of my working-age constituents are on the living wage, so it has a huge impact—they are £2,000 better off each year. All those measures make work pay, as seen by the increase in employment to 32 million people—the highest number since records began.

Finally, I would like to make a comparison with our European Union neighbours. Let us consider France. By 2015, we had created more jobs in five years in Yorkshire than have been created by France as a whole. The French are now looking to adopt our welfare reforms. They know that unless they modernise their welfare state, their unemployment rate will never be reduced from a shocking 9.7% to our rate of 4.2%. Some 1.3 million youngsters in France cannot find a job. It is our Government’s policies, in this report, that our EU counterparts are now seeking to replicate. I therefore absolutely recommend the report. I am very proud to stand on the Government Benches on behalf of the party that has delivered it.