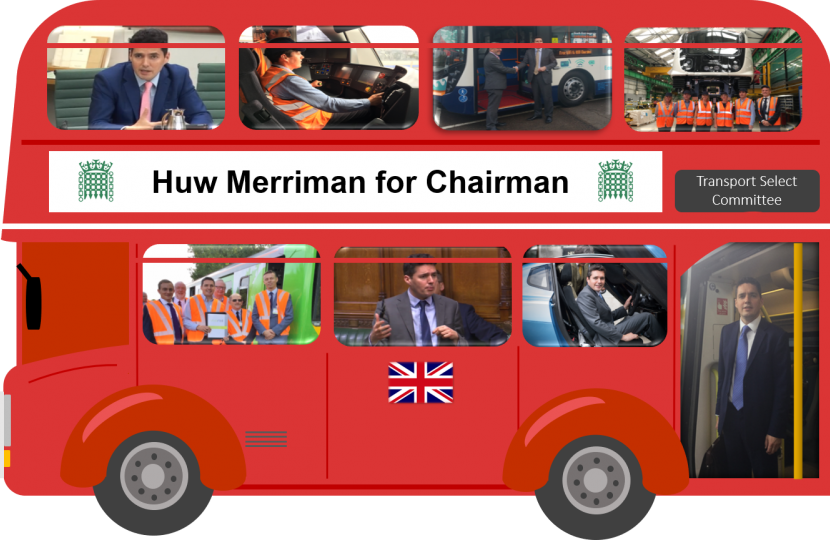 Last night, Bexhill and Battle MP, Huw Merriman, was elected as Chairman of the Transport Select Committee in the House of Commons in a contest voted on by the 650 MPs across all political parties.

Huw has been a serving member of the Transport Select Committee since 2015 and decided to take a step up when the position, having previously been a Labour role since its creation,  was allocated to the Conservative Party . The role of the Transport Select Committee is to scrutinise the work of the Department for Transport and its associated public bodies and transport industry.  It is made up of 11 MPs appointed by the House of Commons across the major political parties.

Speaking after his election, Huw said “Having served for 5 years on the Transport Select Committee, under two brilliant Labour chairs in Louise Ellman and Lilian Greenwood, I understand the importance of this post in Parliament.  I was keen to take on the role of Chairman because I do not believe that the Transport sector delivers value in the UK. There is a lack of competition, accountability and responsibility which causes our constituents to receive a poor service and provision.

“We can do better. The Committee is respected across the sector. By coming up with ideas for change, we can make a positive contribution and improve transport for all. As Chairman of the Committee I want to forensically probe the performance of government departments, agencies and industry; hold ongoing inquiries into long-term transport projects such as HS2 and Heathrow; and ensure we consider environmental, economic and community costs.

The transport sector is at an exciting time with fast-moving technology and innovation developments which can and must be harnessed to ensure robust, long-term and joined up transport strategies across the country to ensure that it is people and communities which are the focus of future transport investment.”

In addition to Chairing the Transport Select Committee, Huw will become a member of the Liaison Committee. This committee, which comprises every Select Committee Chair, is responsible for scrutinising the Prime Minister and for overall Parliamentary scrutiny.