Hopes for a Revised Brexit Agreement 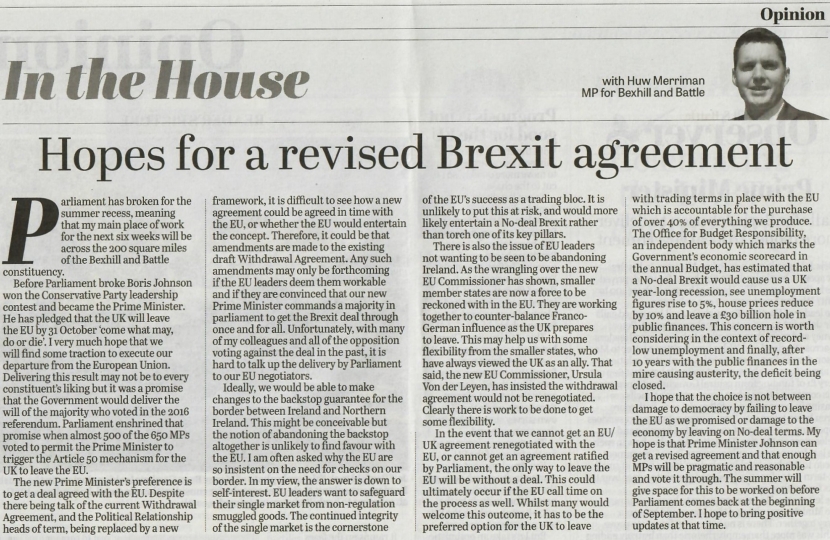 Parliament has broken for the summer recess, meaning that my main place of work for the next six weeks will be across the 200 square miles of the Bexhill and Battle constituency.

Before Parliament broke Boris Johnson won the Conservative Party leadership contest and became the Prime Minister. He has pledged that the UK will leave the EU by 31 October ‘come what may, do or die’. I very much hope that we will find some traction to execute our departure from the European Union. Delivering this result may not be to every constituent’s liking but it was a promise that the Government would deliver the will of the majority who voted in the 2016 referendum. Parliament enshrined that promise when almost 500 of the 650 MPs voted to permit the Prime Minister to trigger the Article 50 mechanism for the UK to leave the EU.

The new Prime Minister’s preference is to get a deal agreed with the EU. Despite there being talk of the current Withdrawal Agreement, and the Political Relationship heads of term, being replaced by a new framework, it is difficult to see how a new agreement could be agreed in time with the EU, or whether the EU would entertain the concept. Therefore, it could be that amendments are made to the existing draft Withdrawal Agreement. Any such amendments may only be forthcoming if the EU leaders deem them workable and if they are convinced that our new Prime Minister commands a majority in parliament to get the Brexit deal through once and for all. Unfortunately, with many of my colleagues and all of the opposition voting against the deal in the past, it is hard to talk up the delivery by Parliament to our EU negotiators.

Ideally, we would be able to make changes to the backstop guarantee for the border between Ireland and Northern Ireland. This might be conceivable but the notion of abandoning the backstop altogether is unlikely to find favour with the EU. I am often asked why the EU are so insistent on the need for checks on our border. In my view, the answer is down to self-interest. EU leaders want to safeguard their single market from non-regulation smuggled goods. The continued integrity of the single market is the cornerstone of the EU's success as a trading bloc. It is unlikely to put this at risk, and would more likely entertain a No-deal Brexit rather than torch one of its key pillars.

There is also the issue of EU leaders not wanting to be seen to be abandoning Ireland. As the wrangling over the new EU Commissioner has shown, smaller member states are now a force to be reckoned with in the EU. They are working together to counter-balance Franco-German influence as the UK prepares to leave. This may help us with some flexibility from the smaller states, who have always viewed the UK as an ally. That said, the new EU Commissioner, Ursula Von der Leyen, has insisted the withdrawal agreement would not be renegotiated. Clearly there is work to be done to get some flexibility.

In the event that we cannot get an EU/UK agreement renegotiated with the EU, or cannot get an agreement ratified by Parliament, the only way to leave the EU will be without a deal. This could ultimately occur if the EU call time on the process as well. Whilst many would welcome this outcome, it has to be the preferred option for the UK to leave with trading terms in place with the EU which is accountable for the purchase of over 40% of everything we produce. The Office for Budget Responsibility, an independent body which marks the Government’s economic scorecard in the annual Budget, has estimated that a No-deal Brexit would cause us a UK year-long recession, see unemployment figures rise to 5%, house prices reduce by 10% and leave a £30 billion hole in public finances. This concern is worth considering in the context of record-low unemployment and finally, after 10 years with the public finances in the mire causing austerity, the deficit being closed.

I hope that the choice is not between damage to democracy by failing to leave the EU as we promised or damage to the economy by leaving on No-deal terms. My hope is that Prime Minister Johnson can get a revised agreement and that enough MPs will be pragmatic and reasonable and vote it through. The summer will give space for this to be worked on before Parliament comes back at the beginning of September. I hope to bring positive updates at that time.