For the greater good we sometimes face practical choices 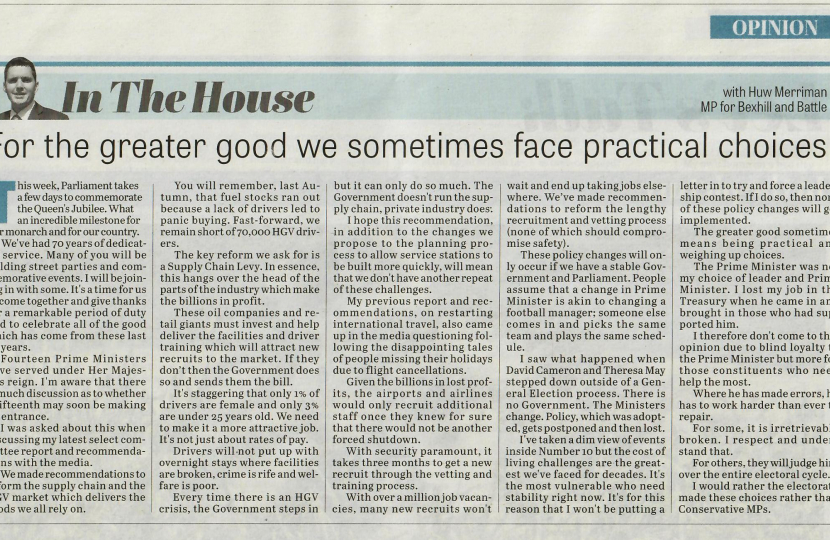 This week, Parliament takes a few days to commemorate the Queen's Jubilee. What an incredible milestone for our monarch and for our country. We've had 70 years of dedicated service. Many of you will be holding street parties and commemorative events. I will be joining in with some. It's a time for us to come together and give thanks for a remarkable period of duty and to celebrate all of the good which has come from these last 70 years.

Fourteen Prime Ministers have served under Her Majesty's reign. I'm aware that there is much discussion as to whether a fifteenth may soon be making an entrance. I was asked about this when discussing my latest select committee report and recommendations with the media. We made recommendations to reform the supply chain and the HGV market which delivers the goods we all rely on. You will remember, last Autumn, that fuel stocks ran out because a lack of drivers led to panic buying. Fast-forward, we remain short of 70,000 HGV drivers.

The key reform we ask for is a Supply Chain Levy. In essence, this hangs over the head of the parts of the industry which make the billions in profit. These oil companies and retail giants must invest and help deliver the facilities and driver training which will attract new recruits to the market. If they don’t then the Government does so and sends them the bill.

It's staggering that only 1% of drivers are female and only 3% are under 25 years old. We need to make it a more attractive job. It's not just about rates of pay. Drivers will not put up with overnight stays where facilities are broken, crime is rife and welfare is poor. Every time there is an HGV crisis, the Government steps in but it can only do so much. The Government doesn't run the supply chain, private industry does. I hope this recommendation, in addition to the changes we propose to the planning process to allow service stations to be built more quickly, will mean that we don't have another repeat of these challenges.

My previous report and recommendations, on restarting international travel, also came up in the media questioning following the disappointing tales of people missing their holidays due to flight cancellations. Given the billions in lost profits, the airports and airlines would only recruit additional staff once they knew for sure that there would not be another forced shutdown. With security paramount, it takes three months to get a new recruit through the vetting and training process. With over a million job vacancies, many new recruits won't wait and end up taking jobs elsewhere. We’ve made recommendations to reform the lengthy recruitment and vetting process (none of which should compromise safety).

These policy changes will only occur if we have a stable Government and Parliament. People assume that a change in Prime Minister is akin to changing a football manager; someone else comes in and picks the same team and plays the same schedule. I saw what happened when David Cameron and Theresa May stepped down outside of a General Election process. There is no Government. The Ministers change. Policy, which was adopted, gets postponed and then lost. I've taken a dim view of events inside Number 10 but the cost of living challenges are the greatest we've faced for decades. It's the most vulnerable who need stability right now. It's for this reason that I won't be putting a letter in to try and force a leadership contest. If I do so, then none of these policy changes will get implemented. The greater good sometimes means being practical and weighing up choices. The Prime Minister was not my choice of leader and Prime Minister. I lost my job in the Treasury when he came in and brought in those who had supported him. I therefore don't come to this opinion due to blind loyalty to the Prime Minister but more for those constituents who need help the most. Where he has made errors, he has to work harder than ever to repair. For some, it is irretrievably broken. I respect and understand that. For others, they will judge him over the entire electoral cycle. I would rather the electorate made these choices rather than Conservative MPs.