Focus on law-making to help victims and tackle crime 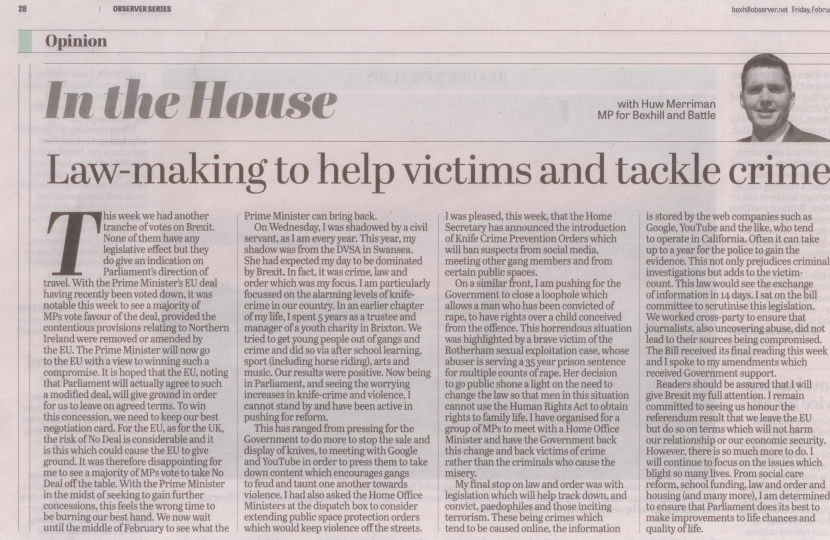 This week we had another tranche of votes on Brexit. None of them have any legislative effect but they do give an indication on Parliament’s direction of travel. With the Prime Minister’s EU deal having recently been voted down, it was notable this week to see a majority of MPs vote favour of the deal, provided the contentious provisions relating to Northern Ireland were removed or amended by the EU. The Prime Minister will now go to the EU with a view to winning such a compromise. It is hoped that the EU, noting that Parliament will actually agree to such a modified deal, will give ground in order for us to leave on agreed terms. To win this concession, we need to keep our best negotiation card. For the EU, as for the UK, the risk of No Deal is considerable and it is this which could cause the EU to give ground. It was therefore disappointing for me to see a majority of MPs vote to take No Deal off the table. With the Prime Minister in the midst of seeking to gain further concessions, this feels the wrong time to be burning our best hand. We now wait until the middle of February to see what the Prime Minister can bring back.

On Wednesday, I was shadowed by a civil servant, as I am every year. This year, my shadow was from the DVSA in Swansea. She had expected my day to be dominated by Brexit. In fact, it was crime, law and order which was my focus. I am particularly focussed on the alarming levels of knife-crime in our country. In an earlier chapter of my life, I spent 5 years as a trustee and manager of a youth charity in Brixton. We tried to get young people out of gangs and crime and did so via after school learning, sport (including horse riding), arts and music. Our results were positive. Now being in Parliament, and seeing the worrying increases in knife-crime and violence, I cannot stand by and have been active in pushing for reform.

This has ranged from pressing for the Government to do more to stop the sale and display of knives, to meeting with Google and YouTube in order to press them to take down content which encourages gangs to feud and taunt one another towards violence. I had also asked the Home Office Ministers at the dispatch box to consider extending public space protection orders which would keep violence off the streets. I was pleased, this week, that the Home Secretary has announced the introduction of Knife Crime Prevention Orders which will ban suspects from social media, meeting other gang members and from certain public spaces.

On a similar front, I am pushing for the Government to close a loophole which allows a man who has been convicted of rape, to have rights over a child conceived from the offence. This horrendous situation was highlighted by a brave victim of the Rotherham sexual exploitation case, whose abuser is serving a 35 year prison sentence for multiple counts of rape. Her decision to go public shone a light on the need to change the law so that men in this situation cannot use the Human Rights Act to obtain rights to family life. I have organised for a group of MPs to meet with a Home Office Minister and have the Government back this change and back victims of crime rather than the criminals who cause the misery.

My final stop on law and order was with legislation which will help track down, and convict, paedophiles and those inciting terrorism. These being crimes which tend to be caused online, the information is stored by the web companies such as Google, YouTube and the like, who tend to operate in California. Often it can take up to a year for the police to gain the evidence. This not only prejudices criminal investigations but adds to the victim-count. This law would see the exchange of information in 14 days. I sat on the bill committee to scrutinise this legislation. We worked cross-party to ensure that journalists, also uncovering abuse, did not lead to their sources being compromised. The Bill received its final reading this week and I spoke to my amendments which received Government support.

Readers should be assured that I will give Brexit my full attention. I remain committed to seeing us honour the referendum result that we leave the EU but do so on terms which will not harm our relationship or our economic security. However, there is so much more to do. I will continue to focus on the issues which blight so many lives. From social care reform, school funding, law and order and housing (and many more), I am determined to ensure that Parliament does its best to make improvements to life chances and quality of life.