An eventful and challenging week 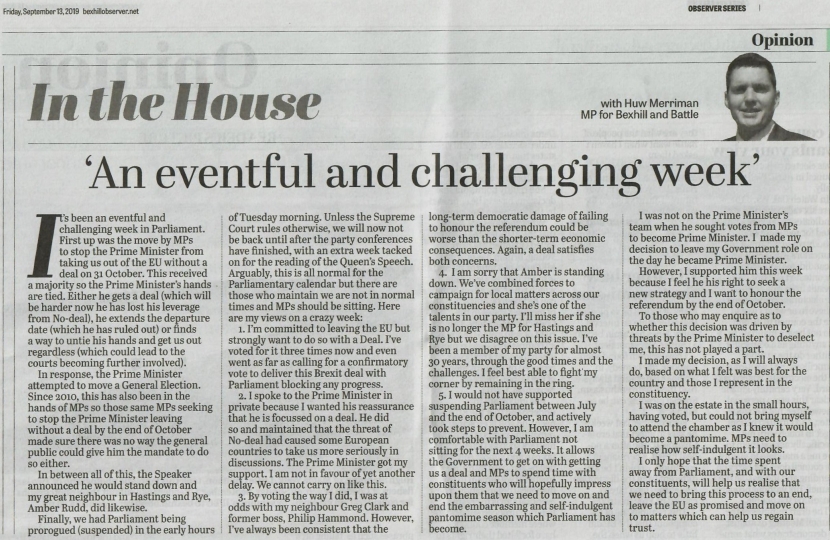 It’s been an eventful and challenging week in Parliament. First up was the move by MPs to stop the Prime Minister from taking us out of the EU without a deal on 31 October. This received a majority so the Prime Minister’s hands are tied. Either he gets a deal (which will be harder now he has lost his leverage from No-deal), he extends the departure date (which he has ruled out) or finds a way to untie his hands and get us out regardless (which could lead to the courts becoming further involved).

In response, the Prime Minister attempted to move a General Election. Since 2010, this has also been in the hands of MPs so those same MPs seeking to stop the Prime Minister leaving without a deal by the end of October made sure there was no way the general public could give him the mandate to do so either.

In between all of this, the Speaker announced he would stand down and my great neighbour in Hastings and Rye, Amber Rudd, did likewise.

Finally, we had Parliament being prorogued (suspended) in the early hours of Tuesday morning. Unless the Supreme Court rules otherwise, we will now not be back until after the party conferences have finished, with an extra week tacked on for the reading of the Queen’s Speech. Arguably, this is all normal for the Parliamentary calendar but there are those who maintain we are not in normal times and MPs should be sitting. Here are my views on a crazy week:

1.            I’m committed to leaving the EU but strongly want to do so with a Deal. I’ve voted for it three times now and even went as far as calling for a confirmatory vote to deliver this Brexit deal with Parliament blocking any progress.

2.            I spoke to the Prime Minister in private because I wanted his reassurance that he is focussed on a deal. He did so and maintained that the threat of No-deal had caused some European countries to take us more seriously in discussions. The Prime Minister got my support. I am not in favour of yet another delay. We cannot carry on like this.

3.            By voting the way I did, I was at odds with my neighbour Greg Clark and former boss, Philip Hammond. However, I’ve always been consistent that the long-term democratic damage of failing to honour the referendum could be worse than the shorter-term economic consequences. Again, a deal satisfies both concerns.

4.            I am sorry that Amber is standing down. We’ve combined forces to campaign for local matters across our constituencies and she’s one of the talents in our party. I’ll miss her if she is no longer the MP for Hastings and Rye but we disagree on this issue. I’ve been a member of my party for almost 30 years, through the good times and the challenges. I feel best able to fight my corner by remaining in the ring.

5.            I would not have supported suspending Parliament between July and the end of October, and actively took steps to prevent. However, I am comfortable with Parliament not sitting for the next 4 weeks. It allows the Government to get on with getting us a deal and MPs to spend time with constituents who will hopefully impress upon them that we need to move on and end the embarrassing and self-indulgent pantomime season which Parliament has become.

I was not on the Prime Minister’s team when he sought votes from MPs to become Prime Minister. I  made my decision to leave my Government role on the day he became Prime Minister. However, I supported him this week because I feel he his right to seek a new strategy and I want to honour the referendum by the end of October. To those who may enquire as to whether this decision was driven by threats by the Prime Minister to deselect me, this has not played a part. I made my decision, as I will always do, based on what I felt was best for the country and those I represent in the constituency.

I was on the estate in the small hours, having voted, but could not bring myself to attend the chamber as I knew it would become a pantomime. MPs need to realise how self-indulgent it looks. I only hope that the time spent away from Parliament, and with our constituents, will help us realise that we need to bring this process to an end, leave the EU as promised and move on to matters which can help us regain trust.