Evaluating the impact on Bees and other pollinators from Neonicotinoids by Huw Merriman, Chairman of the All Party Parliamentary Group for Bees 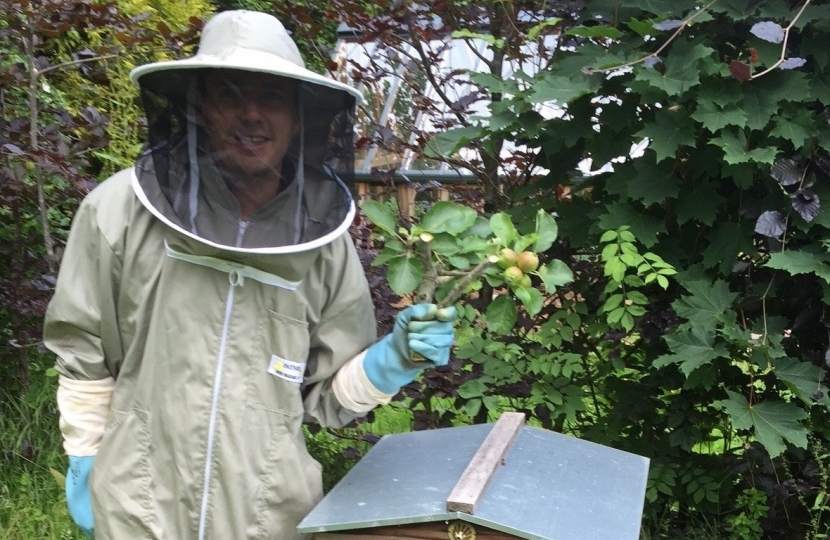 Since the General Election of 2015, which marked the start of my new life as a Member of Parliament, I have received more campaign emails on the subject of bees and pollinators than on any other subject. Taking into consideration that the nation has grappled with the decisions on military action over Syria, our membership of the EU and how to reduce Government spending, this surprising focus on insects is a welcome reminder that constituents are aware that without pollinators we will all starve in the long term.

Having kept bees, with a varied degrees of success, for the last 5 years, it struck me that pollinators, as well as our concerned constituents, need advocates in Parliament to ensure that we continue to campaign for their presence. Parliament enjoys cross-party groups (known as APPGs) to cover the most bizarre and exotic of the nation's rich tapestry. On this basis, with public interest being so strong, it felt right to set one up for bees and other pollinators. With so many colleagues, from across the party divide, being lobbied on the same subject, we were not short of members and I was happy to be elected as the new APPG Chairman for Bees (and other pollinators).

Our aim is to promote the role of our pollinators and to ensure that Government policy, and our environmental and farming interests, serve to allow these winged wonders to thrive. Unfortunately, our pollinators need all the help they can get. We are on a downward spiral when looking at their numbers.

So what has caused the uptick in public concern? The main campaign focus is on the use of an agricultural product called neonicotinoids. On paper, this is a fantastic new product. Seeds are coated in toxins meaning that farmers do not have to spray pesticides. Neonicotinoids are predominantly used on oil-seed rape. This crop has become prevalent in our fields over the years, turning the fields yellow (and adding rather bitter nectar to honey in the process). Neonicotinoids prevent the flea beetle larvae from destroying these crops. What's not to like for pollinators by coating a seed in a chemical, which is only prevalent at the start of the year when our bees are snug in their hives? This could not only be the future of better crop yield but also protection of our pollinators and avoid the need to spray chemicals seven times over the period when pollinators are active. The potential reason is that it could impact the central nerve system of insects and therefore contribute to a decline in pollinators.

Surely, if this is conclusive, we should ban neonicotinoids if they are so bad for our pollinators? This is the view of Friends of the Earth, and many constituents led by the campaigning website 38 degrees. The European Commission, which takes a cautionary risk-based approach believes so and has stopped its use for the last two years unless member states determine that it is needed for exceptional and emergency reasons. Britain is still a member of the EU so works to this framework. DEFRA, which tends to make its decisions not by potential risk but by conclusive science, gave an exception to allow oil-seed rape farmers to use neonicotinoids in limited areas of East Anglia last year but refrained from allowing applications this year. The NFU, representing farmers, those who need our pollinators to perform, takes the view that there is no conclusive evidence that neonicotinoids are harming pollinators and are pushing for wider use to be permitted until the science is proven.

As ever, it comes down to the science and, frustratingly, for those of us who want to make a call based on the science, it is inconclusive. Surely, if these products have been in operation for the last 20 years, we would know if they are safe or in need of permanent ban by now? This is to misunderstand the wonders of our pollinators. They live in their own complex world and roam free from the confines of a science laboratory. Replicating their colonies, and their open fields, is a difficult ask, even for the world's finest scientists.

So what are the asks from the APPG for Bees and Pollinators? There are three:

1. Conclusive Science
When we held our first APPG event, a debate on neonicotinoids between Friends of the Earth and the NFU, I asked for conclusive science, whereupon both sides attempted to produce 'conclusive science' which only contradicted each other. We need one conclusive 'science of the science' study, commissioned by the world's leading nations, perhaps sponsored by the UN, to back either side or report that the jury is currently out.

2. Work Together
Both the farming and the environmental lobby are genuine in their desire to improve the population of bees and other pollinators. Frustratingly, they are poles apart in attempting to find a consensus over the science. The Parliamentary Group I chair consists of Conservative, Labour, SNP, Northern Irish and Welsh nationalist MPs. We may not agree on much but we do find common cause and friendship over our desire to champion pollinators. Following our lead, could the farming and environmental lobby do likewise and come together to discuss this issue and recognise that their own evidence cannot be conclusive if there is something to be said for the opposing scientific views?

3. Focus on a wider debate
Neonicotinoids are an obvious focus for a debate. This is a relatively new agricultural product and stands at the forefront of a debate over modern agri-products versus tradition. In reality, our pollinators have been in decline long before this product was launched. Most scientists believe that habitat loss remains the biggest challenge for pollinator survival. By focussing so much on neonicotinoids, we are failing to discuss whether the huge industrialisation of farming, global warming, a loss of hedgerows and natural habitat, food fashions and a rush of amateur beekeepers (like me) are more obvious reasons for a loss of bees and other pollinators than one particular innovation.

Those of us who are mystified and bewitched by bees would point to their hive as being an example of a cut-throat industry which consistently evolves and uses every single tool in its armoury to survive and thrive. We owe it to bees, and other pollinators, to explore our new science in the same fashion and not rush to judgment. More than that, we should, like our colonies, work together as one to find a future which will benefit both farmers, environmentalists, consumers and beekeepers alike.