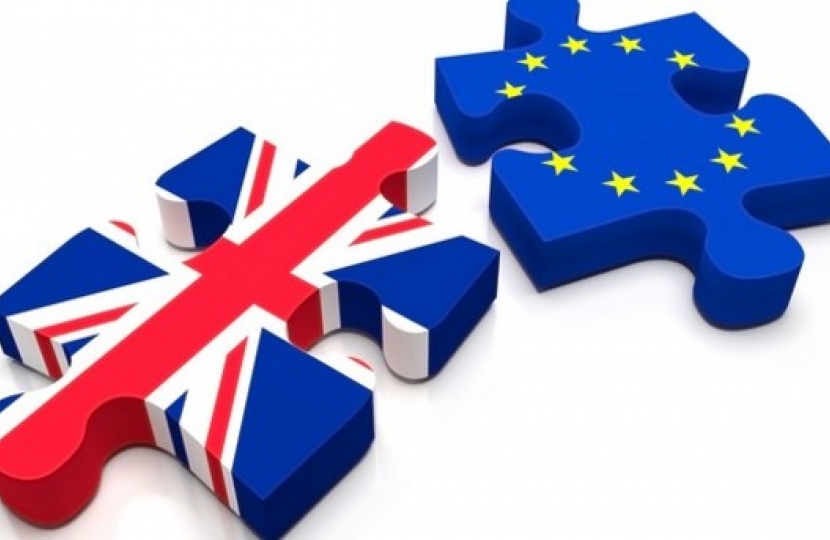 Over the past few weeks I have received a large volume of correspondence from constituents expressing various views on Brexit and how they wish for me, as their local MP, to represent them in the House of Commons.

As a result, I have provided a further update to that which I sent to constituents in December. Due to the high volume of correspondence and numerous questions, I have set out one comprehensive view of the matters which tend to get raised.

To those who mentioned it, my responses on this subject are always written by me and my views are my own. This is the most important issue of our time. You may not agree with my position but I hope you will not doubt my sincerity or my genuine desire to do what I feel is best for the country and constituency (with both democracy and the economy in mind).

In January, I voted for the PM’s Withdrawal Agreement.

It does not deliver a complete break with the EU and it means following the common rulebook on goods and accepting some influence from the European Court of Justice when it comes to governing this agreement and a future trade deal. The deal will see us continuing to work with our EU partners. It does mean that we end Free Movement, end future payments to the EU, leave the Common Agricultural Policy and the Common Fisheries Policy and become free to make our own laws and world trade deals outside this arrangement. There are some grey areas, and parts I do not like, but it is a compromise agreement and relies on political solutions via the Political Declaration to solve issues in Northern Ireland and other aspects.

To those who say ‘Leave Means Leave’, the literature used by the official Vote Leave campaign in the referendum promised a trade deal, ties with the EU and free trade. There was no talk of No Deal. To those who say ‘We must not leave the EU’, this agreement has been struck with the EU and means we can continue to trade and work with good relations.

It may not please either side and it may be a compromise. However, whilst there are polar-opposites in our country on the EU debate, I believe the majority understand that big issues need some form of compromise, that we need to solve this issue and we need to deliver a mix of democracy and economic stability. This is what this agreement delivers. I have voted for something which you may not find perfect. However, I have voted for something to happen rather than merely vote solutions down. Other MPs can speak for themselves but they will be responsible if we deny democracy and do not deliver the referendum or cause economic damage by seeing us leave with no deal at all.

Despite voting for the PM’s deal, I additionally voted for the amendment to the Withdrawal Agreement in order to try and break the impasse. Parliament passed this motion and this now sees the PM go back to the EU and state with confidence that Parliament would agree a deal provided the Northern Ireland backstop issue is removed by the EU (meaning the UK would not stay indefinitely in a Customs Union) or time limited. This idea attracted much support from those on our benches who had previously voted against the PM’s deal.  I hope that the EU, as we move towards the 29 March 2019, will realise the damage which leaving the EU without a deal would cause, to both the UK and EU, and give a further concession which would allow the PM’s deal to be agreed by Parliament – meaning we leave the EU but with an orderly exit.

Taking No Deal off the table

I have not voted to take No Deal off the table. Whilst I have concerns about the economic impact if we end up without a deal, it is not the time to take away the best negotiation card we have with the EU. If we remove this, why would the EU bother giving further ground on the EU deal, and backstop, which we seek to negotiate?

I will not vote for anything which means substantially delaying exit of our EU membership.  We are due to be leaving the EU on 29 March 2019.  I have already voted for this date when I voted for the PM’s deal.  I would only countenance an extension in the event that it allowed us to leave on better terms to the UK (e.g. we have the chance to remove the Backstop) and was merely a short delay to finalise details.  Postponing the date for no specific reason is merely kicking the can down the road due to an inability to compromise and make a decision.

I will not support a second referendum. We have already had a People’s Vote. We always promised to deliver for the majority of that vote. I voted to Remain but what kind of democrat would I be if I decided to reject the ballot box because I did not like the result? This is the same ballot box which I argue gives me a mandate as your MP. Holding a second referendum will cause more delay, more uncertainty, will cause people to lose faith in democracy and those who seek election under it and will just lead to a request for a third referendum. It is time to accept the decision, compromise and deliver so we can move on to other matters which cause concern.

I hope that this background sufficiently addresses the issues raised and explains my rationale for voting the way I have.