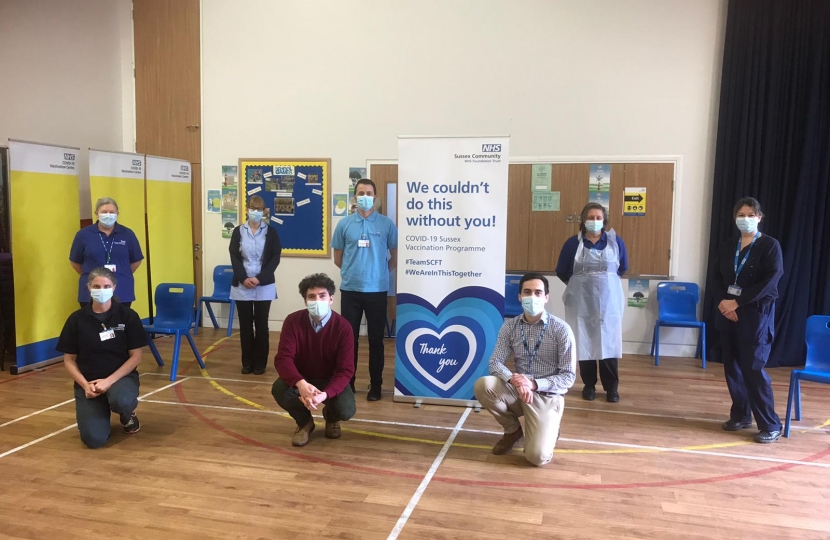 Last Friday (19 February), local MP, Huw Merriman, finished his parliamentary recess tour of vaccination centres in his Bexhill and Battle constituency with a visit to Etchingham Village Hall which is the vaccination centre for patients of the Rural Rother GP practices

Whilst residents in Bexhill started to receive their vaccinations from the end of December, residents across Rural Rother and Battle had to wait a little longer for their vaccination centre to be delivered. This caused understandable frustration, which Huw raised to the Prime Minister and the Health Secretary in the House of Commons chamber.

Huw said "I spent much time working with the Sussex Community NHS Foundation Trust to find a solution. Our local GP teams were unable to provide their own surgeries due to the size of building required. The GPs and the Foundation therefore worked hard to land a solution. The result was the transformation of Etchingham village hall into a vaccination centre.”

The centre was envisaged to deliver 4,000 vaccinations to the first four priority cohorts and, starting later, had a lot to do. Within 30 days they had delivered an outstanding 16,000 vaccinations having expanded their supplies and scaled up to deliver both Pfizer and Astra Zeneca.

Huw added "It was a huge privilege to join the team and say thank you to the NHS workers and volunteers who have made it such a success. I also want to say a big thank you to the villagers of Etchingham for turning their gardens into car parks and being so amenable. Etchingham Primary School have handed over their canteen and hall to turn it to the vaccination room when the upscale was announced (giving the team 24 hours' notice to retrofit it).The centre may have made for longer journey times but we all owe them a debt of thanks for the long hours and dedication which has delivered such phenomenal results."

The centre is managed by James Bowey. A British Airways jumbo pilot, James found himself grounded during the pandemic so is doing something incredible whilst the aviation market hibernates.

James commented “The positivity and enthusiasm of not only the NHS and Local GP staff, but also the volunteers, local community, Etchingham Primary School and the patients has simply been an inspiration. I know all staff on site are extremely proud to be part of the programme and aiding the national effort in combatting Covid-19. My thanks and gratitude goes out to all those involved. Thank you!”