Enterprise, diplomacy and resolve: why Jeremy Hunt can lead our United Kingdom 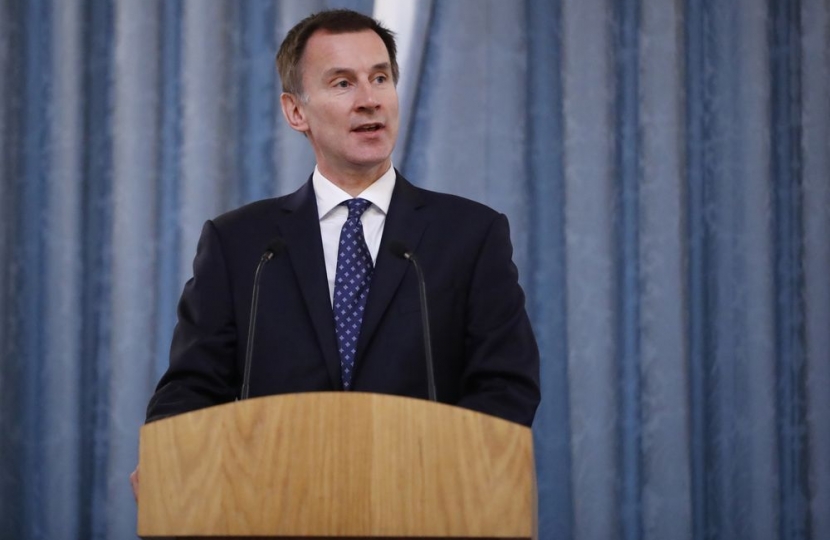 Every year, usually during party conference season, I avoid politics for a week to visit twenty five of my constituency schools. In discussing how our country has evolved to become the modern democracy it is, the positivity and optimism which young people radiate fuels me during the winter Westminster months ahead.

Recently, this optimism has been on the slide. Not just in my schools but in industry and from residents who stop me on the street. People are frustrated that Brexit has not just paralysed democracy but blighted their own individual decisions and their outlook of our country. They also feel sad that this issue has caused division in their communities and families. They want an end to the Brexit malaise and they want someone who will unite the nation and move us on to the domestic issues which need our attention.

Having voted three times for the deal with the EU which would have delivered Brexit, I share the concern. Having voted three times for the default option in keeping No Deal on the table, and against extending Article 50 beyond the end of March, I feel that I have stuck by my commitment that the UK should leave the EU. Each time, I have been in the minority in Parliament hence we remain trapped. We need someone with the negotiating experience, diplomacy and resolve to break the impasse. Jeremy Hunt has the track-record on each of these counts.

As a successful entrepreneur, who built his business from scratch, Jeremy needs no lessons in how to negotiate. In politics, he faced down the vested interests of the BMA doctors union to modernise the Junior Doctors contract so that it was easier for hospitals to provide safer care. I remember it well because I had some empathy for the cause. Jeremy not only persuaded me, but ultimately the Junior Doctors, that a modernised contract would be better for the patient and the workforce. Jeremy’s business background is also hugely relevant to our future after Brexit, and in my work for the Chancellor at the Treasury I see how important a really ambitious, pro-business agenda is, and how a business-like focus on getting things done is critical to making government work for ordinary people. As a proven entrepreneur, rather than simply having had a career in politics, he has the credibility and experience we need.

When it comes to diplomacy, Jeremy knows that in any successful negotiation, both parties need to feel satisfied with the result if we want a future relationship to flourish. From his time as Foreign Secretary, Jeremy has built a reputation at home and abroad to champion the UK’s trade and security interests but not at the expense of human rights and the freedom of our citizens, such as Nazanin Zaghari-Ratcliffe in Iran. Displaying the right mix of calm and steel is something which the next Prime Minister will need in the locker when it comes to persuasion with the EU and Parliament.

It is on resolve which marked Jeremy Hunt as my type of politician when I first came to Parliament in 2015. Cabinet members like to host new MPs for drink for the charm offensive. The difference with Jeremy was that he invited small groups in for lunch so we all had a chance to pitch in with ideas. Rather than being in the political hothouse of Parliament, Jeremy hosted us in his office at the Department of Health so we could talk about his department and reform. This demonstrated a serious policy maker who wanted to deliver radical change rather than a political strategy which merely gets us re-elected with no purpose in-between. I noticed a white-board with hospital names on it. These names, he explained, were where the latest preventable acts had occurred which had scarred the lives of patients. His aim was to eradicate these from happening by encouraging the NHS to be open about what had occurred in order for the organisation to learn from mistakes. It was this resolve to the patient which saw Jeremy negotiate the largest peace-time increase in NHS funding. To do this, he invited every colleague to discuss options and the tough choices we may have to make on taxation. Thanks to the Chancellor, my political boss, we were able to fund this 20% boost from expertly managing our economy.

So for me, it is a question of who will best deliver for all of my constituents, who want us to deliver on Brexit so we can move on to the great challenges which face our country. From social care reform, school funding and delivering the housing which our young people need, we need someone who has a track-record in risk-taking and delivery. None of this will be possible without solving the Brexit challenge. Jeremy has the skills to negotiate a new deal and the respect in Parliament to get it delivered. Crucially, you will not hear a bad word said about Jeremy from those who shadow him on the opposition benches. He has the respect across Parliament to deliver, in circumstances where others may fail due to personal animosity.

When I go to my next round of school visits, I want my party to have selected a Prime Minister who has demonstrated the values which speak to the optimism and place in the world which young and older alike proclaim. Of my 100,000 constituents, only 0.5% are members of my party. Ultimately, our members will make the final determination. This is an enormous privilege. With it comes responsibility and a need to reflect on who best will deliver for our neighbours in the 99.5% who do not get a leadership vote. If our nation can stand proud again then it needs to be united. If we do this, whilst the Labour Party peddles in hate and a failed Marxist agenda, then our party will reap the benefits. If we opt for anyone who will divide then we will only have ourselves to blame if the country puts Jeremy Corbyn into No 10.