Eat out to help out and work out 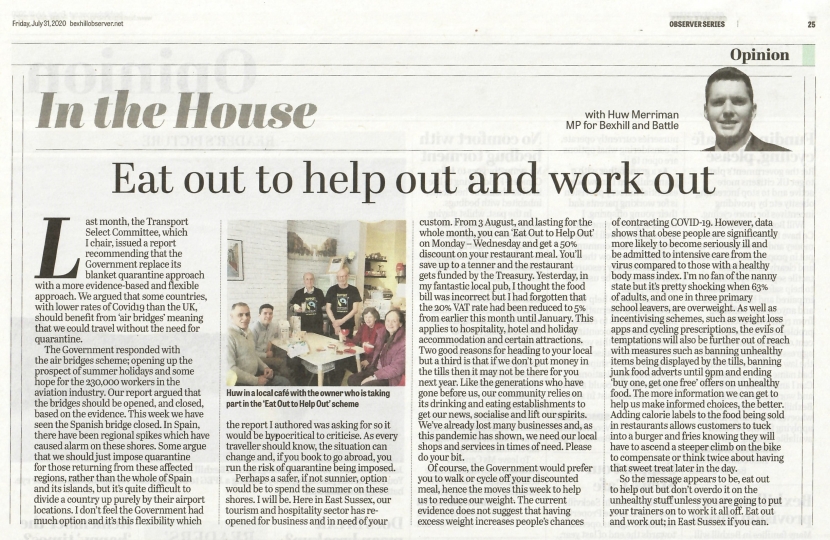 Last month, the Transport Select Committee, which I chair, issued a report recommending that the Government replace its blanket quarantine approach with a more evidence-based and flexible approach. We argued that some countries, with lower rates of Covid19 than the UK, should benefit from ‘air bridges’ meaning that we could travel without the need for quarantine.

The Government responded with the air bridges scheme; opening up the prospect of summer holidays and some hope for the 230,000 workers in the aviation industry. Our report argued that the bridges should be opened, and closed, based on the evidence. This week we have seen the Spanish bridge closed. In Spain, there have been regional spikes which have caused alarm on these shores. Some argue that we should just impose quarantine for those returning from these affected regions, rather than the whole of Spain and its islands, but it’s quite difficult to divide a country up purely by their airport locations. I don’t feel the Government had much option and it’s this flexibility which the report I authored was asking for so it would be hypocritical to criticise. As every traveller should know, the situation can change and, if you book to go abroad, you run the risk of quarantine being imposed.

Perhaps a safer, if not sunnier, option would be to spend the summer on these shores. I will be. Here in East Sussex, our tourism and hospitality sector has re-opened for business and in need of your custom. From 3 August, and lasting for the whole month, you can ‘Eat Out to Help Out’ on Monday – Wednesday and get a 50% discount on your restaurant meal. You’ll save up to a tenner and the restaurant gets funded by the Treasury. Yesterday, in my fantastic local pub, I thought the food bill was incorrect but I had forgotten that the 20% VAT rate had been reduced to 5% from earlier this month until January. This applies to hospitality, hotel and holiday accommodation and certain attractions. Two good reasons for heading to your local but a third is that if we don’t put money in the tills then it may not be there for you next year. Like the generations who have gone before us, our community relies on its drinking and eating establishments to get our news, socialise and lift our spirits. We’ve already lost many businesses and, as this pandemic has shown, we need our local shops and services in times of need. Please do your bit.

Of course, the Government would prefer you to walk or cycle off your discounted meal, hence the moves this week to help us to reduce our weight. The current evidence does not suggest that having excess weight increases people’s chances of contracting COVID-19. However, data shows that obese people are significantly more likely to become seriously ill and be admitted to intensive care from the virus compared to those with a healthy body mass index. I’m no fan of the nanny state but it’s pretty shocking when 63% of adults, and one in three primary school leavers, are overweight. As well as incentivising schemes, such as weight loss apps and cycling prescriptions, the evils of temptations will also be further out of reach with measures such as banning unhealthy items being displayed by the tills, banning junk food adverts until 9pm and ending ‘buy one, get one free’ offers on unhealthy food. The more information we can get to help us make informed choices, the better. Adding calorie labels to the food being sold in restaurants allows customers to tuck into a burger and fries knowing they will have to ascend a steeper climb on the bike to compensate or think twice about having that sweet treat later in the day.

So the message appears to be, eat out to help out but don’t overdo it on the unhealthy stuff unless you are going to put your trainers on to work it all off. Eat out and work out; in East Sussex if you can.