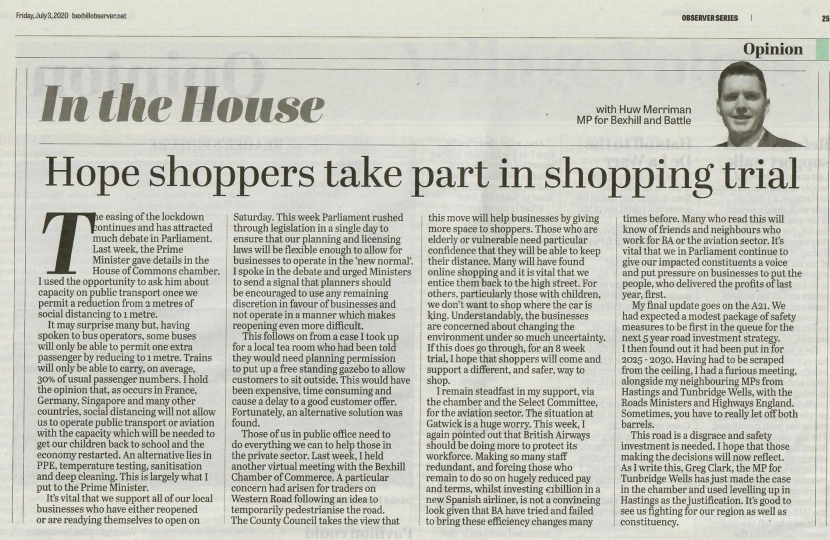 The easing of the lockdown continues and has attracted much debate in Parliament. Last week, the Prime Minister gave details in the House of Commons chamber. I used the opportunity to ask him about capacity on public transport once we permit a reduction from 2 metres of social distancing to 1 metre. It may surprise many but, having spoken to bus operators, some buses will only be able to permit one extra passenger by reducing to 1 metre. Trains will only be able to carry, on average, 30% of usual passenger numbers. I hold the opinion that, as occurs in France, Germany, Singapore and many other countries, social distancing will not allow us to operate public transport or aviation with the capacity which will be needed to get our children back to school and the economy restarted. An alternative lies in PPE, temperature testing, sanitisation and deep cleaning. This is largely what I put to the Prime Minister.

It’s vital that we support all of our local businesses who have either reopened or are readying themselves to open on Saturday. This week Parliament rushed through legislation in a single day to ensure that our planning and licensing laws will be flexible enough to allow for businesses to operate in the ‘new normal’. I spoke in the debate and urged Ministers to send a signal that planners should be encouraged to use any remaining discretion in favour of businesses and not operate in a manner which makes reopening even more difficult. This follows on from a case I took up for a local tea room who had been told they would need planning permission to put up a free standing gazebo to allow customers to sit outside. This would have been expensive, time consuming and cause a delay to a good customer offer. Fortunately, an alternative solution was found.

Those of us in public office need to do everything we can to help those in the private sector. Last week, I held another virtual meeting with the Bexhill Chamber of Commerce. A particular concern had arisen for traders on Western Road following an idea to temporarily pedestrianise the road. The County Council takes the view that this move will help businesses by giving more space to shoppers. Those who are elderly or vulnerable need particular confidence that they will be able to keep their distance. Many will have found online shopping and it is vital that we entice them back to the high street. For others, particularly those with children, we don’t want to shop where the car is king. Understandably, the businesses are concerned about changing the environment under so much uncertainty. If this does go through, for an 8 week trial, I hope that shoppers will come and support a different, and safer, way to shop.

I remain steadfast in my support, via the chamber and the Select Committee, for the aviation sector. The situation at Gatwick is a huge worry. This week, I again pointed out that British Airways should be doing more to protect its workforce. Making so many staff redundant, and forcing those who remain to do so on hugely reduced pay and terms, whilst investing €1billion in a new Spanish airliner, is not a convincing look given that BA have tried and failed to bring these efficiency changes many times before. Many who read this will know of friends and neighbours who work for BA or the aviation sector. It’s vital that we in Parliament continue to give our impacted constituents a voice and put pressure on businesses to put the people, who delivered the profits of last year, first.

My final update goes on the A21. We had expected a modest package of safety measures to be first in the queue for the next 5 year road investment strategy. I then found out it had been put in for 2025 - 2030. Having had to be scraped from the ceiling, I had a furious meeting, alongside my neighbouring MPs from Hastings and Tunbridge Wells, with the Roads Ministers and Highways England. Sometimes, you have to really let off both barrels. This road is a disgrace and safety investment is needed. I hope that those making the decisions will now reflect. As I write this, Greg Clark, the MP for Tunbridge Wells has just made the case in the chamber and used levelling up in Hastings as the justification. It’s good to see us fighting for our region as well as constituency.