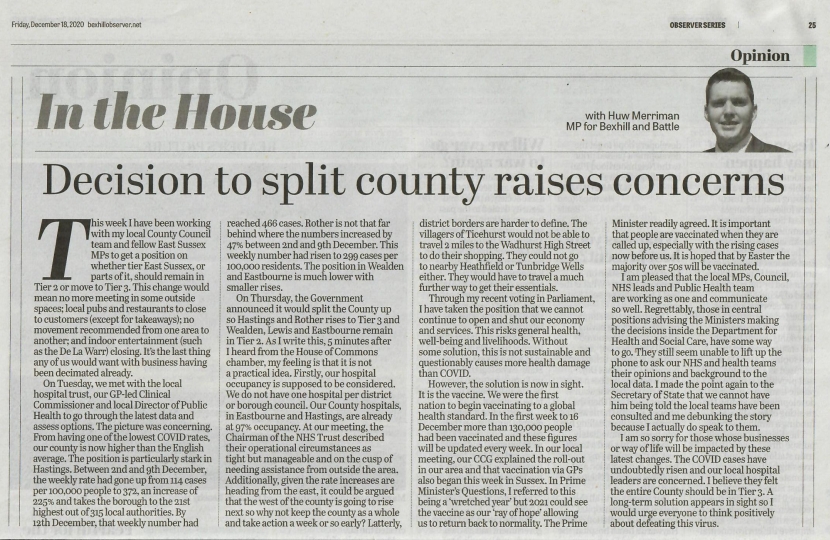 This week I have been working with my local County Council team and fellow East Sussex MPs to get a position on whether tier East Sussex, or parts of it, should remain in Tier 2 or move to Tier 3. This change would mean no more meeting in some outside spaces; local pubs and restaurants to close to customers (except for takeaways); no movement recommended from one area to another; and indoor entertainment (such as the De La Warr) closing. It’s the last thing any of us would want with business having been decimated already.

On Tuesday, we met with the local hospital trust, our GP-led Clinical Commissioner and local Director of Public Health to go through the latest data and assess options. The picture was concerning. From having one of the lowest COVID rates, our county is now higher than the English average. The position is particularly stark in Hastings. Between 2nd and 9th December, the weekly rate had gone up from 114 cases per 100,000 people to 372, an increase of 225% and takes the borough to the 21st highest out of 315 local authorities. By 12th December, that weekly number had reached 466 cases. Rother is not that far behind where the numbers increased by 47% between 2nd and 9th December. This weekly number had risen to 299 cases per 100,000 residents. The position in Wealden and Eastbourne is much lower with smaller rises.

On Thursday, the Government announced it would split the County up so Hastings and Rother rises to Tier 3 and Wealden, Lewes and Eastbourne remain in Tier 2. As I write this, 5 minutes after I heard from the House of Commons chamber, my feeling is that it is not a practical idea. Firstly, our hospital occupancy is supposed to be considered. We do not have one hospital per district or borough council. Our County hospitals, in Eastbourne and Hastings, are already at 97% occupancy. At our meeting, the Chairman of the NHS Trust described their operational circumstances as tight but manageable and on the cusp of needing assistance from outside the area. Additionally, given the rate increases are heading from the east, it could be argued that the west of the county is going to rise next so why not keep the county as a whole and take action a week or so early? Latterly, district borders are harder to define. The villagers of Ticehurst would not be able to travel 2 miles to the Wadhurst High Street to do their shopping. They could not go to nearby Heathfield or Tunbridge Wells either. They would have to travel a much further way to get their essentials.

Through my recent voting in Parliament, I have taken the position that we cannot continue to open and shut our economy and services. This risks general health, well-being and livelihoods. Without some solution, this is not sustainable and questionably causes more health damage than COVID. However, the solution is now in sight. It is the vaccine. We were the first nation to begin vaccinating to a global health standard. In the first week to 16 December more than 130,000 people had been vaccinated and these figures will be updated every week. In our local meeting, our CCG explained the roll-out in our area and that vaccination via GPs also began this week in Sussex. In Prime Minister’s Questions, I referred to this being a ‘wretched year’ but 2021 could see the vaccine as our ‘ray of hope’ allowing us to return back to normality. The Prime Minister readily agreed. It is important that people are vaccinated when they are called up, especially with the rising cases now before us. It is hoped that by Easter the majority over 50s will be vaccinated.

I am pleased that the local MPs, Council, NHS leads and Public Health team are working as one and communicate so well. Regrettably, those in central positions advising the Ministers making the decisions inside the Department for Health and Social Care, have some way to go. They still seem unable to lift up the phone to ask our NHS and health teams their opinions and background to the local data. I made the point again to the Secretary of State that we cannot have him being told the local teams have been consulted and me debunking the story because I actually do speak to them.

I am so sorry for those whose businesses or way of life will be impacted by these latest changes. The COVID cases have undoubtedly risen and our local hospital leaders are concerned. I believe they felt the entire County should be in Tier 3. A long-term solution appears in sight so I would urge everyone to think positively about defeating this virus.