Celebrate the resilience of young people 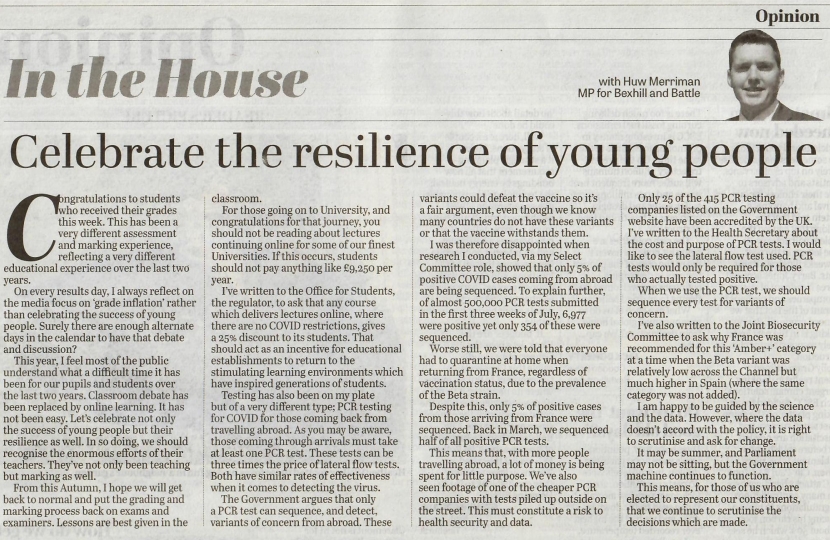 On every results day, I always reflect on the media focus on ‘grade inflation’ rather than celebrating the success of young people. Surely there are enough alternate days in the calendar to have that debate and discussion? This year, I feel most of the public understand what a difficult time it has been for our pupils and students over the last two years. Classroom debate has been replaced by online learning. It has not been easy. Let’s celebrate not only the success of young people but their resilience as well. In so doing, we should recognise the enormous efforts of their teachers. They’ve not only been teaching but marking as well. From this Autumn, I hope we will get back to normal and put the grading and marking process back on exams and examiners. Lessons are best given in the classroom. For those going on to University, and congratulations for that journey, you should not be reading about lectures continuing online for some of our finest Universities. If this occurs, students should not pay anything like £9,250 per year. I’ve written to the Office for Students, the regulator, to ask that any course which delivers lectures online, where there are no COVID restrictions, gives a 25% discount to its students. That should act as an incentive for educational establishments to return to the stimulating learning environments which have inspired generations of students.

Testing has also been on my plate but of a very different type; PCR testing for COVID for those coming back from travelling abroad. As you may be aware, those coming through arrivals must take at least one PCR test. These tests can be three times the price of lateral flow tests. Both have similar rates of effectiveness when it comes to detecting the virus. The Government argues that only a PCR test can sequence, and detect, variants of concern from abroad. These variants could defeat the vaccine so it’s a fair argument, even though we know many countries do not have these variants or that the vaccine withstands them.

I was therefore disappointed when research I conducted, via my Select Committee role, showed that only 5% of positive COVID cases coming from abroad are being sequenced. To explain further, of almost 500,000 PCR tests submitted in the first three weeks of July, 6,977 were positive yet only 354 of these were sequenced. Worse still, we were told that everyone had to quarantine at home when returning from France, regardless of vaccination status, due to the prevalence of the Beta strain. Despite this, only 5% of positive cases from those arriving from France were sequenced. Back in March, we sequenced half of all positive PCR tests.

This means that, with more people travelling abroad, a lot of money is being spent for little purpose. We’ve also seen footage of one of the cheaper PCR companies with tests piled up outside on the street. This must constitute a risk to health security and data. Only 25 of the 415 PCR testing companies listed on the Government website have been accredited by the UK. I’ve written to the Health Secretary about the cost and purpose of PCR tests. I would like to see the lateral flow test used. PCR tests would only be required for those who actually tested positive. When we use the PCR test, we should sequence every test for variants of concern. I’ve also written to the Joint Biosecurity Committee to ask why France was recommended for this ‘Amber+’ category at a time when the Beta variant was relatively low across the Channel but much higher in Spain (where the same category was not added).

I am happy to be guided by the science and the data. However, where the data doesn’t accord with the policy, it is right to scrutinise and ask for change.

It may be summer, and Parliament may not be sitting, but the Government machine continues to function. This means, for those of us who are elected to represent our constituents, that we continue to scrutinise the decisions which are made.