Bring the Bayeux Tapestry Back to its Inspirational Home 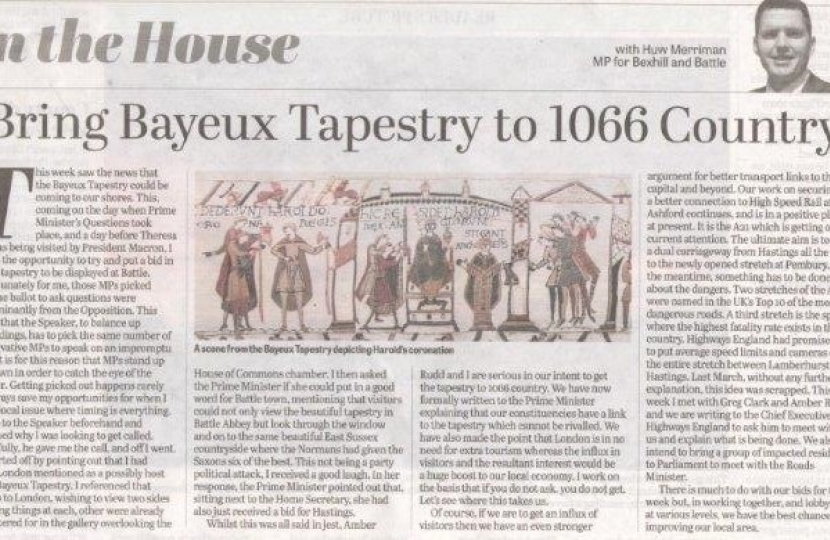 This week saw the news that the Bayeux Tapestry could be coming to our shores. This, coming on the day when Prime Minister's Questions took place, and a day before Theresa May was being visited by President Macron, I sensed the opportunity to try and put a bid in for the tapestry to be displayed at Battle.

Fortunately for me, those MPs picked from the ballot to ask questions were predominantly from the Opposition. This means that the Speaker, to balance up proceedings, has to pick the same number of Conservative MPs to speak on an impromptu basis. It is for this reason that MPs stand up and down in order to catch the eye of the Speaker. Getting picked out happens rarely so I always save my opportunities for when I have a local issue where timing is everything. I spoke to the Speaker beforehand and explained why I was looking to get called. Thankfully, he gave me the call, and off I went.

I started off by pointing out that I had heard London mentioned as a possibly host to the Bayeux Tapestry. I referenced that visitors to London, wishing to view two sides chucking things at each, other were already well catered for in the gallery overlooking the House of Commons chamber. I then asked the Prime Minister if she could put in a good word for Battle town, mentioning that visitors could not only view the beautiful tapestry in Battle Abbey but look through the window and on to the same beautiful East Sussex countryside where the Normans had given the Saxons six of the best. This not being a party political attack, I received a good laugh. In her response, the Prime Minister pointed out that, sitting next to the Home Secretary, she had also just received a bid for Hastings.

Whilst this was all said in jest, Amber Rudd and I are serious in our intent to get the tapestry to 1066 country. We have now formally written to the Prime Minister explaining that our constituencies have a link to the tapestry which cannot be rivalled. We have also made the point that London is in no need for extra tourism whereas the influx in visitors and the resultant interest would be a huge boost to our local economy. I work on the basis that if you do not ask, you do not get. Let's see where this takes us.

Of course, if we are to get an influx of visitors then we have an even stronger argument for better transport links to the capital and beyond. Our work on securing a better connection to High Speed Rail at Ashford continues, and is in a positive place at present. It is the A21 which is getting our current attention. The ultimate aim is to get a dual carriageway from Hastings all the way to the newly opened stretch at Pembury. In the meantime, something has to be done about the dangers. Two stretches of the A21 were named in the UK's Top 10 of the most dangerous roads. A third stretch is the spot where the highest fatality rate exists in the country. Highways England had promised to put average speed limits and cameras on the entire stretch between Lamberhurst and Hastings. Last March, without any further explanation, this idea was scrapped. This week I met with Greg Clark and Amber Rudd and we are writing to the Chief Executive of Highways England to ask him to meet with us and explain what is being done. We also intend to bring a group of impacted residents to Parliament to meet with the Roads Minister.

There is much to do with our bids for the week but, in working together, and lobbying at various levels, we have the best chance of improving our local area.