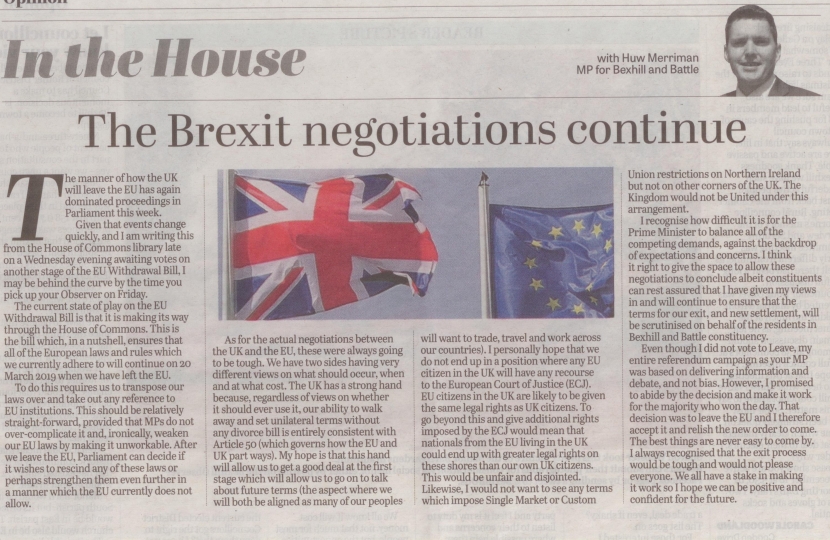 The manner of how the UK will leave the EU has again dominated proceedings in Parliament this week. Given that events change quickly, and I am writing this from the House of Commons library late on a Wednesday evening awaiting votes on another stage of the EU Withdrawal Bill, I may be behind the curve by the time you pick up your Observer on Friday.

The current state of play on the EU Withdrawal Bill is that it is making its way through the House of Commons. This is the bill which, in a nutshell, ensures that all of the European laws and rules which we currently adhere to will continue on 20 March 2019 when we have left the EU. To do this requires us to transpose our laws over and take out any reference to EU institutions. This should be relatively straight-forward, provided that MPs do not over-complicate it and, ironically, weaken our EU laws by making it unworkable. After we leave the EU, Parliament can decide if it wishes to rescind any of these laws or perhaps strengthen them even further in a manner which the EU currently does not allow.

As for the actual negotiations between the UK and the EU, these were always going to be tough. We have two sides having very different views on what should occur, when and at what cost. The UK has a strong hand because, regardless of views on whether it should ever use it, our ability to walk away and set unilateral terms without any divorce bill is entirely consistent with Article 50 (which governs how the EU and UK part ways). My hope is that this hand will allow us to get a good deal at the first stage which will allow us to go on to talk about future terms (the aspect where we will both be aligned as many of our peoples will want to trade, travel and work across our countries). I personally hope that we do not end up in a position where any EU citizen in the UK will have any recourse to the European Court of Justice (ECJ). EU citizens in the UK are likely to be given the same legal rights as UK citizens. To go beyond this and give additional rights imposed by the ECJ would mean that nationals from the EU living in the UK could end up with greater legal rights on these shores than our own UK citizens. This would be unfair and disjointed. Likewise, I would not want to see any terms which impose Single Market or Custom Union restrictions on Northern Ireland but not on other corners of the UK. The Kingdom would not be United under this arrangement.

I recognise how difficult it is for the Prime Minister to balance all of the competing demands, against the backdrop of expectations and concerns. I think it right to give the space to allow these negotiations to conclude albeit constituents can rest assured that I have given my views in and will continue to ensure that the terms for our exit, and new settlement, will be scrutinised on behalf of the residents in Bexhill and Battle constituency.

Even though I did not vote to Leave, my entire referendum campaign as your MP was based on delivering information and debate, and not bias. However, I promised to abide by the decision and make it work for the majority who won the day. That decision was to leave the EU and I therefore accept it and relish the new order to come. The best things are never easy to come by. I always recognised that the exit process would be tough and would not please everyone. We all have a stake in making it work so I hope we can be positive and confident for the future.