Brexit decision is an invidious choice 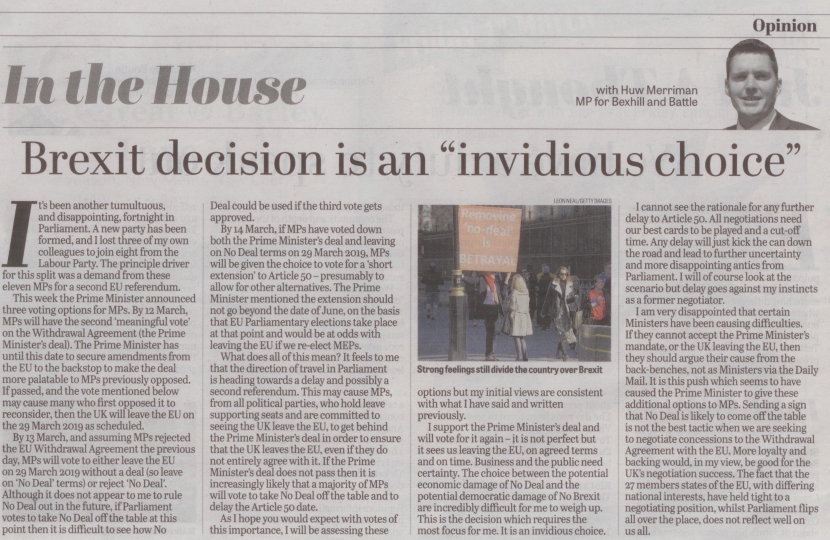 It’s been another tumultuous, and disappointing, fortnight in Parliament. A new party has been formed, and I lost three of my own colleagues to join eight from the Labour Party. The principle driver for this split was a demand from these eleven MPs for a second EU referendum.

This week the Prime Minister announced three voting options for MPs. By 12 March, MPs will have the second ‘meaningful vote’ on the Withdrawal Agreement (the Prime Minister’s deal). The Prime Minister has until this date to secure amendments from the EU to the backstop to make the deal more palatable to MPs previously opposed. If passed, and the vote mentioned below may cause many who first opposed it to reconsider, then the UK will leave the EU on the 29 March 2019 as scheduled.

By 13 March, and assuming MPs rejected the EU Withdrawal Agreement the previous day, MPs will vote to either leave the EU on 29 March 2019 without a deal (so leave on ‘No Deal’ terms) or reject ‘No Deal’. Although it does not appear to me to rule No Deal out in the future, if Parliament votes to take No Deal off the table at this point then it is difficult to see how No Deal could be used if the third vote gets approved.

By 14 March, if MPs have voted down both the Prime Minister’s deal and leaving on No Deal terms on 29 March 2019, MPs will be given the choice to vote for a ‘short extension’ to Article 50 – presumably to allow for other alternatives. The Prime Minister mentioned the extension should not go beyond the date of June, on the basis that EU Parliamentary elections take place at that point and would be at odds with leaving the EU if we re-elect MEPs.

What does all of this mean? It feels to me that the direction of travel in Parliament is heading towards a delay and possibly a second referendum. This may cause MPs, from all political parties, who hold leave supporting seats and are committed to seeing the UK leave the EU, to get behind the Prime Minister’s deal in order to ensure that the UK leaves the EU, even if they do not entirely agree with it. If the Prime Minister’s deal does not pass then it is increasingly likely that a majority of MPs will vote to take No Deal off the table and to delay the Article 50 date.

As I hope you would expect with votes of this importance, I will be assessing these options but my initial views are consistent with what I have said and written previously.

I support the Prime Minister’s deal and will vote for it again – it is not perfect but it sees us leaving the EU, on agreed terms and on time. Business and the public need certainty. The choice between the potential economic damage of No Deal and the potential democratic damage of No Brexit are incredibly difficult for me to weigh up. This is the decision which requires the most focus for me. It is an invidious choice.

I cannot see the rationale for any further delay to Article 50. All negotiations need our best cards to be played and a cut-off time. Any delay will just kick the can down the road and lead to further uncertainty and more disappointing antics from Parliament. I will of course look at the scenario but delay goes against my instincts as a former negotiator.

I am very disappointed that certain Ministers have been causing difficulties. If they cannot accept the Prime Minister’s mandate, or the UK leaving the EU, then they should argue their cause from the back-benches, not as Ministers via the Daily Mail. It is this push which seems to have caused the Prime Minister to give these additional options to MPs. Sending a sign that No Deal is likely to come off the table is not the best tactic when we are seeking to negotiate concessions to the Withdrawal Agreement with the EU. More loyalty and backing would, in my view, be good for the UK’s negotiation success. The fact that the 27 members states of the EU, with differing national interests, have held tight to a negotiating position, whilst Parliament flips all over the place, does not reflect well on us all.