Bin the hate and offer kindness instead 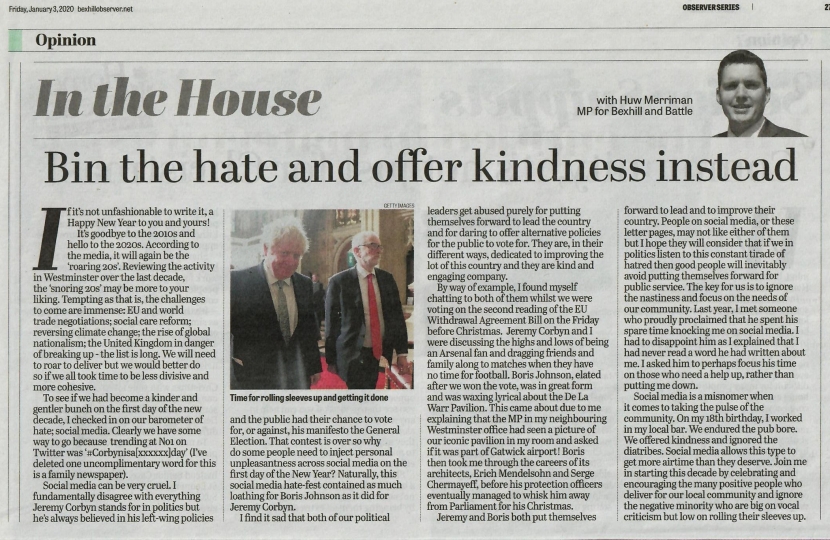 If it’s not unfashionable to write it, a Happy New Year to you and yours!

It’s goodbye to the 2010s and hello to the 2020s. According to the media, it will again be the ‘roaring 20s’. Reviewing the activity in Westminster over the last decade, the ‘snoring 20s’ may be more to your liking. Tempting as that is, the challenges to come are immense: EU and world trade negotiations; social care reform; reversing climate change; the rise of global nationalism; the United Kingdom in danger of breaking up - the list is long. We will need to roar to deliver but we would better do so if we all took time to be less divisive and more cohesive.

To see if we had become a kinder and gentler bunch on the first day of the new decade, I checked in on our barometer of hate; social media. Clearly we have some way to go because trending at No1 on Twitter was ‘#Corbynisa[xxxxxx]day’ (I’ve deleted one uncomplimentary word for this is a family newspaper).

Social media can be very cruel. I fundamentally disagree with everything Jeremy Corbyn stands for in politics but he’s always believed in his left-wing policies and the public had their chance to vote for, or against, his manifesto the General Election. That contest is over so why do some people need to inject personal unpleasantness across social media on the first day of the New Year? Naturally, this social media hate-fest contained as much loathing for Boris Johnson as it did for Jeremy Corbyn.

I find it sad that both of our political leaders get abused purely for putting themselves forward to lead the country and for daring to offer alternative policies for the public to vote for. They are, in their different ways, dedicated to improving the lot of this country and they are kind and engaging company.

By way of example, I found myself chatting to both of them whilst we were voting on the second reading of the EU Withdrawal Agreement Bill on the Friday before Christmas.  Jeremy Corbyn and I were discussing the highs and lows of being an Arsenal fan and dragging friends and family along to matches when they have no time for football. Boris Johnson, elated after we won the vote, was in great form and was waxing lyrical about the De La Warr Pavilion. This came about due to me explaining that the MP in my neighbouring Westminster office had seen a picture of our iconic pavilion in my room and asked if it was part of Gatwick airport! Boris then took me through the careers of its architects, Erich Mendelsohn and Serge Chermayeff, before his protection officers eventually managed to whisk him away from Parliament for his Christmas.

Jeremy and Boris both put themselves forward to lead and to improve their country. People on social media, or these letter pages, may not like either of them but I hope they will consider that if we in politics listen to this constant tirade of hatred then good people will inevitably avoid putting themselves forward for public service. The key for us is to ignore the nastiness and focus on the needs of our community. Last year, I met someone who proudly proclaimed that he spent his spare time knocking me on social media. I had to disappoint him as I explained that I had never read a word he had written about me. I asked him to perhaps focus his time on those who need a help up, rather than putting me down.

Social media is a misnomer when it comes to taking the pulse of the community. On my 18th birthday, I worked in my local bar. We endured the pub bore. We offered kindness and ignored the diatribes. Social media allows this type to get more airtime than they deserve. Join me in starting this decade by celebrating and encouraging the many positive people who deliver for our local community and ignore the negative minority who are big on vocal criticism but low on rolling their sleeves up.

Yesterday, Huw asked The Parliamentary Under-Secretary of State for Transport; Paul Maynard, if the Government would look to allow airlines to continue to operate whilst in administration, following the success of the method in the United States.