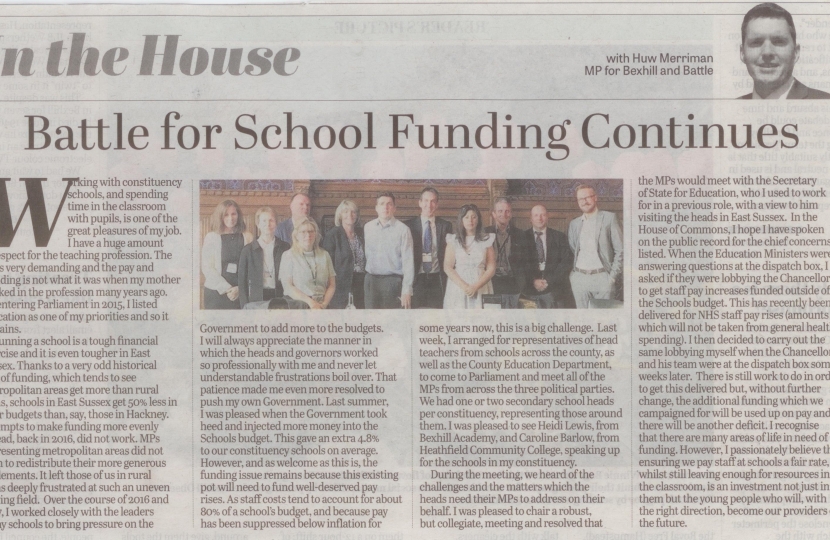 Working with constituency schools, and spending time in the classroom with pupils, is one of the great pleasures of my job. I have a huge amount of respect for the teaching profession. The job is very demanding and the pay and standing is not what it was when my mother worked in the profession many years ago. On entering Parliament in 2015, I listed education as one of my priorities and so it remains.

Running a school is a tough financial exercise and it is even tougher in East Sussex. Thanks to a very odd historical way of funding, which tends to see metropolitan areas get more than rural areas, schools in East Sussex get 50% less in their budgets than, say, those in Hackney. Attempts to make funding more evenly spread, back in 2016, did not work. MPs representing metropolitan areas did not wish to redistribute their more generous settlements. It left those of us in rural areas deeply frustrated at such an uneven playing field.

Over the course of 2016 and 2017, I worked closely with the leaders of my schools to bring pressure on the Government to add more to the budgets. I will always appreciate the manner in which the heads and governors worked so professionally with me and never let understandable frustrations boil over. That patience made me even more resolved to push my own Government. Last summer, I was pleased when the Government took heed and injected more money into the Schools budget. This gave an extra 4.8% to our constituency schools on average. However, and as welcome as this is, the funding issue remains because this existing pot will need to fund well-deserved pay rises. As staff costs tend to account for about 80% of a school’s budget, and because pay has been surpressed below inflation for some years now, this is a big challenge.

Last week, I arranged for representatives of head teachers from schools across the county, as well as the County Education Department, to come to Parliament and meet all of the MPs from across the three political parties. We had one or two secondary school heads per constituency, representing those around them. I was pleased to see Heidi Brown, from Bexhill Academy, and Caroline Barlow, from Heathfield Community College, speaking up for the schools in my constituency.

During the meeting, we heard of the challenges and the matters which the heads need their MPs to address on their behalf. I was pleased to chair a robust, but collegiate, meeting and resolved that the MPs would meet with the Secretary of State for Education, who I used to work for in a previous role, with a view to him visiting the heads in East Sussex.

In the House of Commons, I hope I have spoken on the public record for the chief concerns listed. When the Education Ministers were answering questions at the dispatch box, I asked if they were lobbying the Chancellor to get staff pay increases funded outside of the Schools budget. This has recently been delivered for NHS staff pay rises (amounts which will not be taken from general health spending). I then decided to carry out the same lobbying myself when the Chancellor and his team were at the dispatch box some weeks later.

There is still work to do in order to get this delivered but, without further change, the additional funding which we campaigned for will be used up on pay and there will be another deficit. I recognise that there are many areas of life in need of funding. However, I passionately believe that ensuring we pay staff at schools a fair rate, whilst still leaving enough for resources in the classroom, is an investment not just in them but the young people who will, with the right direction, become our providers of the future.