Back in the saddle after busy Parliament 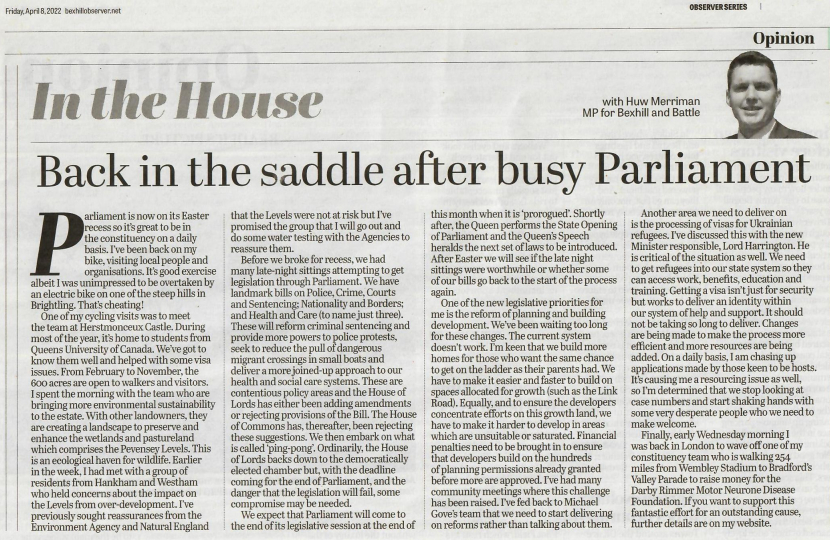 Parliament is now on its Easter recess so it’s great to be in the constituency on a daily basis. I’ve been back on my bike, visiting local people and organisations. It’s good exercise albeit I was unimpressed to be overtaken by an electric bike on one of the steep hills in Brightling. That’s cheating!

One of my cycling visits was to meet the team at Herstmonceux Castle. During most of the year, it’s home to students from Queens University of Canada. We’ve got to know them well and helped with some visa issues. From February to November, the 600 acres are open to walkers and visitors. I spent the morning with the team who are bringing more environmental sustainability to the estate. With other landowners, they are creating a landscape to preserve and enhance the wetlands and pastureland which comprises the Pevensey Levels. This is an ecological haven for wildlife. Earlier in the week, I had met with a group of residents from Hankham and Westham who held concerns about the impact on the Levels from over-development. I’ve previously sought reassurances from the Environment Agency and Natural England that the Levels were not at risk but I’ve promised the group that I will go out and do some water testing with the Agencies to reassure them.

Before we broke for recess, we had many late-night sittings attempting to get legislation through Parliament. We have landmark bills on Police, Crime, Courts and Sentencing; Nationality and Borders; and Health and Care (to name just three). These will reform criminal sentencing and provide more powers to police protests, seek to reduce the pull of dangerous migrant crossings in small boats and deliver a more joined-up approach to our health and social care systems. These are contentious policy areas and the House of Lords has either been adding amendments or rejecting provisions of the Bill. The House of Commons has, thereafter, been rejecting these suggestions. We then embark on what is called ‘ping-pong’. Ordinarily, the House of Lords backs down to the democratically elected chamber but, with the deadline coming for the end of Parliament, and the danger that the legislation will fail, some compromise may be needed.

We expect that Parliament will come to the end of its legislative session at the end of this month when it is ‘prorogued’. Shortly after, the Queen performs the State Opening of Parliament and the Queen’s Speech heralds the next set of laws to be introduced. After Easter we will see if the late night sittings were worthwhile or whether some of our bills go back to the start of the process again.

One of the new legislative priorities for me is the reform of planning and building development. We’ve been waiting too long for these changes. The current system doesn’t work. I’m keen that we build more homes for those who want the same chance to get on the ladder as their parents had. We have to make it easier and faster to build on spaces allocated for growth (such as the Link Road). Equally, and to ensure the developers concentrate efforts on this growth land, we have to make it harder to develop in areas which are unsuitable or saturated. Financial penalties need to be brought in to ensure that developers build on the hundreds of planning permissions already granted before more are approved. I’ve had many community meetings where this challenge has been raised. I’ve fed back to Michael Gove’s team that we need to start delivering on reforms rather than talking about them.

Another area we need to deliver on is the processing of visas for Ukrainian refugees. I’ve discussed this with the new Minister responsible, Lord Harrington. He is critical of the situation as well. We need to get refugees into our state system so they can access work, benefits, education and training. Getting a visa isn’t just for security but works to deliver an identity within our system of help and support. It should not be taking so long to deliver. Changes are being made to make the process more efficient and more resources are being added. On a daily basis, I am chasing up applications made by those keen to be hosts. It’s causing me a resourcing issue as well, so I’m determined that we stop looking at case numbers and start shaking hands with some very desperate people who we need to make welcome.

Finally, early Wednesday morning I was back in London to wave off one of my constituency team who is walking 254 miles from Wembley Stadium to Bradford's Valley Parade to raise money for the Darby Rimmer Motor Neurone Disease Foundation. If you want to support this fantastic effort for an outstanding cause, further details are on my website.