Back to the House for the common good 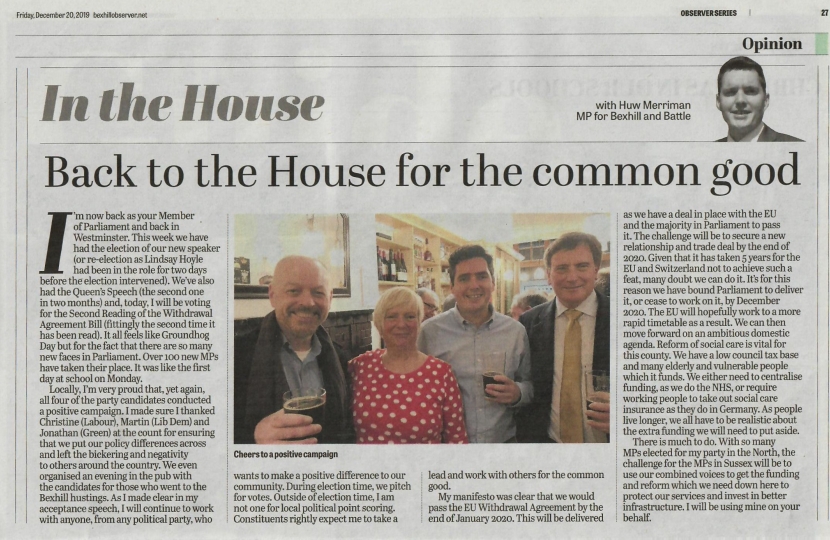 I’m now back as your Member of Parliament and back in Westminster. This week we have had the election of our new speaker (or re-election as Lindsay Hoyle had been in the role for two days before the election intervened). We’ve also had the Queen’s Speech (the second one in two months) and, today, I will be voting for the Second Reading of the Withdrawal Agreement Bill (fittingly the second time it has been read). It all feels like Groundhog Day but for the fact that there are so many new faces in Parliament. Over 100 new MPs have taken their place. It was like the first day at school on Monday.

Locally, I’m very proud that, yet again, all four of the party candidates conducted a positive campaign. I made sure I thanked Christine (Labour), Martin (Lib Dem) and Jonathan (Green) at the count for ensuring that we put our policy differences across and left the bickering and negativity to others around the country. We even organised an evening in the pub with the candidates for those who went to the Bexhill hustings. As I made clear in my acceptance speech, I will continue to work with anyone, from any political party, who wants to make a positive difference to our community. During election time, we pitch for votes. Outside of election time, I am not one for local political point-scoring. Constituents rightly expect me to take a lead and work with others for the common good.

My manifesto was clear that we would pass the EU Withdrawal Agreement by the end of January 2020. This will be delivered as we have a deal in place with the EU and the majority in Parliament to pass it. The challenge will be to secure a new relationship and trade deal by the end of 2020. Given that it has taken 5 years for the EU and Switzerland not to achieve such a feat, many doubt we can do it. It’s for this reason we have bound Parliament to deliver it or cease to work on it, by December 2020. The EU will hopefully work to a more rapid timetable as a result. We can then move forward on an ambitious domestic agenda. Reform of social care is vital for this county. We have a low council tax base and many elderly and vulnerable people which it funds. We either need to centralise funding, as we do the NHS, or require working people to take out social care insurance as they do in Germany. As people live longer, we all have to be realistic about the extra funding we will need to put aside.

There is much to do. With so many MPs elected for my party in the North, the challenge for the MPs in Sussex will be to use our combined voices to get the funding and reform which we need down here to protect our services and invest in better infrastructure. I will be using mine on your behalf.