Back to a frenetic Westminster 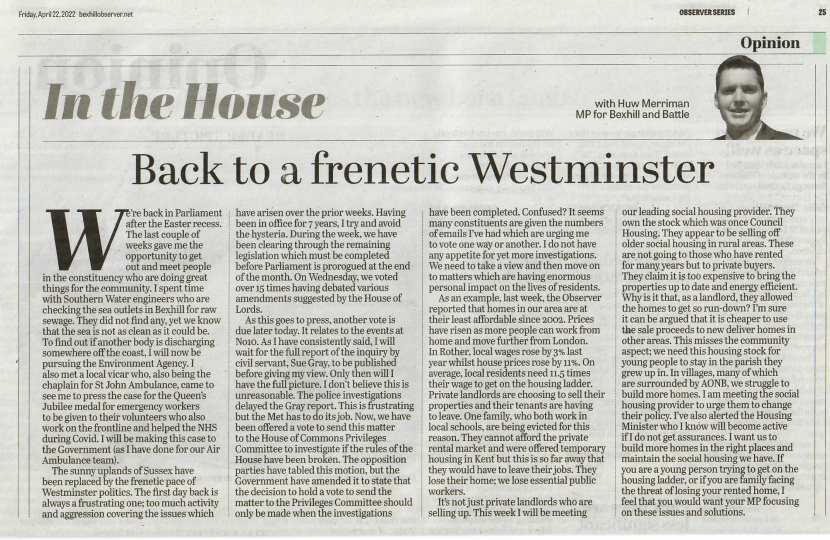 We’re back in Parliament after the Easter recess. The last couple of weeks gave me the opportunity to get out and meet people in the constituency who are doing great things for the community. I spent time with Southern Water engineers who are checking the sea outlets in Bexhill for raw sewage. They did not find any, yet we know that the sea is not as clean as it could be. To find out if another body is discharging somewhere off the coast, I will now be pursuing the Environment Agency. I also met a local vicar who, also being the chaplain for St John Ambulance, came to see me to press the case for the Queen’s Jubilee medal for emergency workers to be given to their volunteers who also work on the frontline and helped the NHS during Covid. I will be making this case to the Government (as I have done for our Air Ambulance team).

The sunny uplands of Sussex have been replaced by the frenetic pace of Westminster politics. The first day back is always a frustrating one; too much activity and aggression covering the issues which have arisen over the prior weeks. Having been in office for 7 years, I try and avoid the hysteria. During the week, we have been clearing through the remaining legislation which must be completed before Parliament is prorogued at the end of the month. On Wednesday, we voted over 15 times having debated various amendments suggested by the House of Lords.

As I type this, another vote is due later today. It relates to the events at No10. As I have consistently said, I will wait for the full report of the inquiry by civil servant, Sue Gray, to be published before giving my view. Only then will I have the full picture. I don’t believe this is unreasonable. The police investigations delayed the Gray report. This is frustrating but the Met has to do its job. Now, we have been offered a vote to send this matter to the House of Commons Privileges Committee to investigate if the rules of the House have been broken. The opposition parties have tabled this motion, but as this goes to press, the Government have amended it to state that the decision to hold a vote to send the matter to the Privileges Committee should only be made when the investigations have been completed. Confused? It seems many constituents are given the numbers of emails I’ve had which are urging me to vote one way or another. I do not have any appetite for yet more investigations. We need to take a view and then move on to matters which are having enormous personal impact on the lives of residents.

As an example, last week, the Observer reported that homes in our area are at their least affordable since 2002. Prices have risen as more people can work from home and move further from London. In Rother, local wages rose by 3% last year whilst house prices rose by 11%. On average, local residents need 11.5 times their wage to get on the housing ladder. Private landlords are choosing to sell their properties and their tenants are having to leave. One family, who both work in local schools, are being evicted for this reason. They cannot afford the private rental market and were offered temporary housing in Kent but this is so far away that they would have to leave their jobs. They lose their home; we lose essential public workers.

It’s not just private landlords who are selling up. This week I will be meeting our leading social housing provider. They own the stock which was once Council Housing. They appear to be selling off older social housing in rural areas. These are not going to those who have rented for many years but to private buyers. They claim it is too expensive to bring the properties up to date and energy efficient. Why is it that, as a landlord, they allowed the homes to get so run-down? I’m sure it can be argued that it is cheaper to use the sale proceeds to new deliver homes in other areas. This misses the community aspect; we need this housing stock for young people to stay in the parish they grew up in. In villages, many of which are surrounded by AONB, we struggle to build more homes. I am meeting the social housing provider to urge them to change their policy. I’ve also alerted the Housing Minister who I know will become active if I do not get assurances. I want us to build more homes in the right places and maintain the social housing we have. If you are a young person trying to get on the housing ladder, or if you are family facing the threat of losing your rented home, I feel that you would want your MP focusing on these issues and solutions.