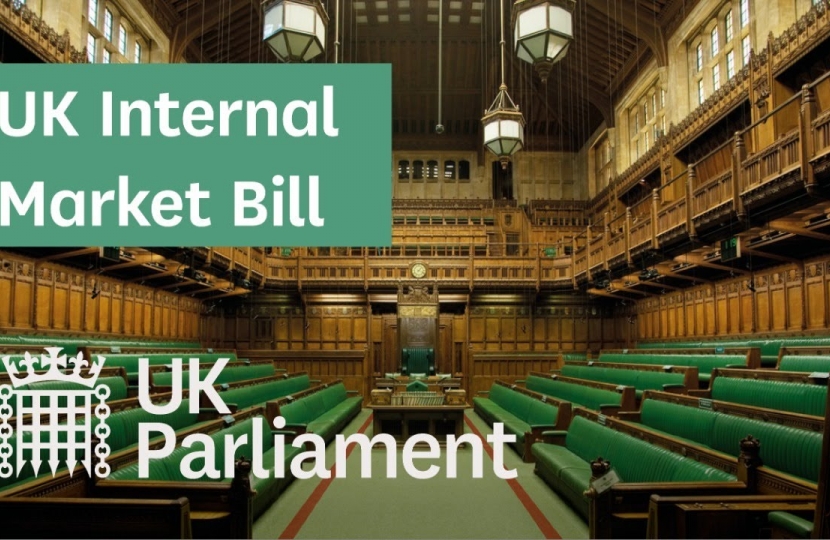 Many constituents have contacted me concerned about the provisions contained in the Internal Market Bill and whether parts of this legislation would breach our international treaty obligations.

As you will see by reading the article which I wrote for our local paper (below), I hold concerns with respect to three of the fifty clauses in this bill and would like to see these clauses neutralised. Parliament is an arcane place hence I want you to understand where my objections will be raised in terms of voting.

MPs debated and voted on whether the Bill should move towards its Committee Stage; where MPs are able to amend the clauses which cause concern. As stated, the bulk of Internal Market Bill causes me no concerns and is necessary; once we leave the EU’s jurisdiction, we will need our own rules governing the internal market of the four nations within the United Kingdom. The Bill will give legal certainty and continuity for businesses and people to work and trade across our four nations. The three provisions which appear to override the Withdrawal Agreement do cause me concern (for the reasons articulated below). These appear to have been added at a later stage and I believe conflict with our international treaty obligations.  Nonetheless, as I concur with the bulk of the provisions, I was content to vote for it to move to the next stage where I will do my best to ensure the Bill is passed minus the offending clauses I seek to  nullify.

At this stage, I expect an amendment to be moved which will address the three clauses which I believe conflict with our existing international treaty obligations. I have informed the Government that I intend to vote, at Committee Stage, for such an amendment. I hope that sufficient numbers of my colleagues will do likewise and influence a change in position by the Government before then. The remainder of the Bill can then pass into law.

“Also making its way back to Parliamentary prominence, has been the Brexit debate. When I was re-elected in 2019, it was on the back of the promise to ‘get Brexit done’. As a candidate, I pledged to support getting a deal for the UK or, should this not be possible, to leave without a deal in place with the EU. In a democracy, it is important to deliver what you stand for. There will be those who do not wish to leave the EU but very few would deny that there was a large mandate for the Government to do so.

Shortly after the election, the Prime Minister’s Withdrawal Agreement, which he successfully negotiated and put to his new MPs, was passed in law. This legal treaty governs the terms of our departure from the EU and will be the end of the matter should we be unable to strike a trade deal. As an International Treaty, both sides are required to abide by the terms and any failure to do so would see our respective courts strike down any decision or legislation which conflicts with its terms.

It was therefore a surprise, this week, to find that the Government, via its Internal Market Bill, is seeking to change some of the terms of the Withdrawal Agreement. Let’s be clear, as if I have not already, we cannot change the terms unilaterally. It’s down to the parties, via the provisions on alteration and dispute, to agree to changes or for the courts to intervene.

At the dispatch box, one Cabinet Minister conceded that the proposed legislation, which I am being asked to vote for, would breach international law. A day later, the Prime Minister made clear that the British people must honour the laws and rules around Covid restrictions (when reducing the numbers who can meet in private down to 6 people). It is important that we practice what we preach. I came in to Parliament to vote in good laws; not breach and break existing laws.

I have explained my position to No10 and I am hoping that I can be given a legal opinion showing me that my vote will not lead to the law being broken. We know that the Government’s most senior law officer has resigned over this issue. I reiterate, this is nothing to do with Brexit, which I am a supporter of. This is an issue about acting lawfully. If I thought it may help get a trade deal in place with the EU and other countries, perhaps I could see the greater good. Given the EU will be well aware that our threat and action will be struck down by our courts, and that countries such as America, Australia and beyond will think twice about negotiating a trade deal if we will not honour such international agreements, it looks counterproductive on all fronts.”