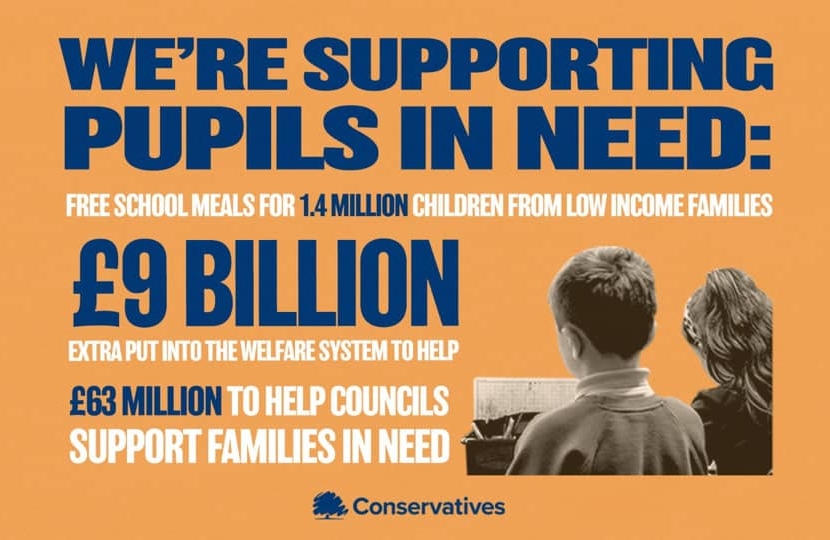 Many have written to me about the vote around Free School Meals.

This was not a vote to deliver Free School Meals outside of term time; it was an opposition day motion criticising the Government. If it had succeeded then it would have not changed any law or policy. Opposition Day Motions are a political means for the opposition to attack the government and I have never voted for an Opposition Day Motion as a result.

As to the issue, Free School Meals are provided during school term time. Until this year, this has always been the case under Conservative, Labour and Coalition Governments. During school holidays it has been regarded as a responsibility for families; just like other provisions are.

Throughout the coronavirus pandemic - while schools were largely closed during lockdown - we provided substantial additional funding to eligible families through the National Voucher Scheme. The total amount of supermarket vouchers redeemed by families was over £380 million. Further to this, we temporarily extended eligibility for free school meals to children from families with no recourse to public funds, an arrangement that we are continuing whilst we undertake a review.

The government has provided more support for families who need it than this measure would deliver.  Since the pandemic, we have added £200 billion in financial support to the economy and those in need. I hope this explains that this is not a question of money (we have increased the amounts spent on the most vulnerable) but which benefits we have increased.

The range of funding measures, include:

• The income protection schemes which have so far protected 12 million jobs and people at a cost of almost £53 billion.

• Adding an additional £9.3 billion this financial year to the families who benefited from the vouchers, which meant an extra £1,040 for families on Universal Credit and Working Tax Credits.

• Providing £63 million in welfare assistance funding to local authorities to support those families with urgent needs.

There has been a lot written about millions of children going hungry because the Government is reversing a policy. I will reiterate, Free School Meals have never been provided during the holidays prior to Easter 2020. Families have received benefits to ensure that their children are fed.  The aim is that we pay the money to families and they then determine how to spend it for their household.

Our stance is that we expect the increased welfare budget to cover the costs of providing for children for those who qualify, now that schools have reopened. This situation on Free School Meals is no different to how the Labour Government dealt with the difficulties which followed the financial crash, and subsequent unemployment, from 2008. It was the Conservative Government who opted to extend Free School Meals to the last two holidays, for the first time, because the schools had to close. It was not because we wanted to alter the system which has existed for decades.

Finally, on the issue of MPs' pay and expenses I should like to clarify some facts. Despite what was thrown around about MP food allowances, MPs do not receive any money for food in Parliament or constituency. They are also not responsible or have any role in the decisions around MPs pay.  It is completely false to suggest that MPs of any political party vote on or have any influence in pay settlements. MPs pay and expenses are decided on and administered by the Independent Parliamentary Standards Authority and further information can be found on their website at this link https://www.theipsa.org.uk/publications/consultations/review-of-mps-pay-and-pensions