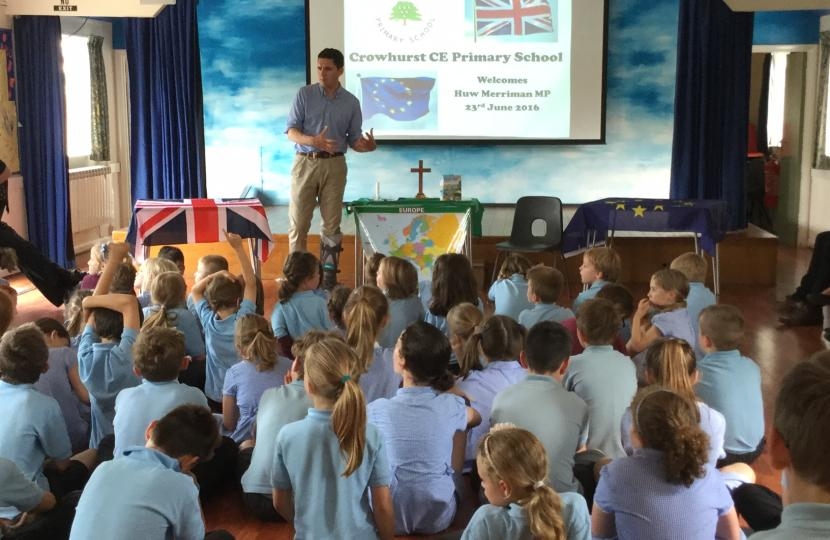 The UK is leaving the EU. This decision was made by the majority of those who voted in the EU referendum. Parliament and Government will now deliver the will of the people. In every vote in Parliament, I have respected the result and sought to give Theresa May the strongest hand to negotiate a good settlement, and new trading relationship, with the 27 remaining EU members. Regardless of votes case last June, it has to be in the interest of everyone in the UK that we move forward and focus on getting the best deal for our nation.

During the EU referendum, I wrote to all of my constituents to provide information and an invite to eight public meetings across the constituency. During these meetings, I explained, with balance, what the legal process would be if the UK voted to leave and what reforms would occur if we remained. I took this stance because I strongly believe that referendums are for the people, and not politicians, to influence. By remaining balanced, I was able to help, rather than lecture. When it came to it, I cast my vote to remain and made this public on polling day. Having not campaigned for one side or the other, I was always going to be entirely comfortable carrying out the mandate of the side which gained the most votes.

With Article 50 having been triggered, Parliament is now in the process of ensuring that all EU laws and rights which exist for UK citizens are transferred to UK legislation so, on the day we leave the EU, all rights will remain as previously granted. This bill is called the EU Withdrawal Bill. You can find more news, published articles and information on the EU Withdrawal Bill and the UK’s negotiations with the EU below:

We must practice what we preach

I’ve had a busy week in Parliament. I’ve spoken up for our local schools and students in a debate in the Chamber about education. I’m particularly keen to ensure that pupils sitting their exams this academic year have an exam paper based on what their teachers can cover in a disrupted year.

Huw Merriman, MP for the Bexhill and Battle constituency, is inviting constituents to a public meeting on Thursday 30 January in Bexhill to provide a latest Brexit explainer on the eve of the UK’s withdrawal from the European Union.

I will now be fighting my third General Election in less than 5 years. It has been an immense privilege to have served the residents of the Bexhill and Battle constituency since 2015. The national picture has been challenging.

Hundreds of constituents have contacted me recently regarding the latest developments around the UK leaving the EU.

Following England’s semi-final victory over New Zealand, Bexhill and Battle MP, Huw Merriman, has opted to postpone his Brexit update meeting for constituents which clashes with the Rugby World Cup Final on the morning of Saturday 2 November.

Please note that this meeting has been postponed. More details to follow shortly.

In my last column, I wrote about Parliament being prorogued, and our subsequent return to Westminster when the Supreme Court ruled the suspension to be unlawful. As a result, I’ve spent two weeks back in Parliament and we have just been prorogued again.

On Monday I asked the Exchequer Secretary to the Treasury whether the Government had prepared for any hit to GDP in the lead-up to a possible no-deal Brexit, following news that some hedge funds could profit.

My look back at yet another eventful week in Parliament.

Article 50 and negotiations with the EU on the UK Government website:

Parliament’s analysis of how leaving the EU will affect different policy areas in the UK and links to relevant documents: