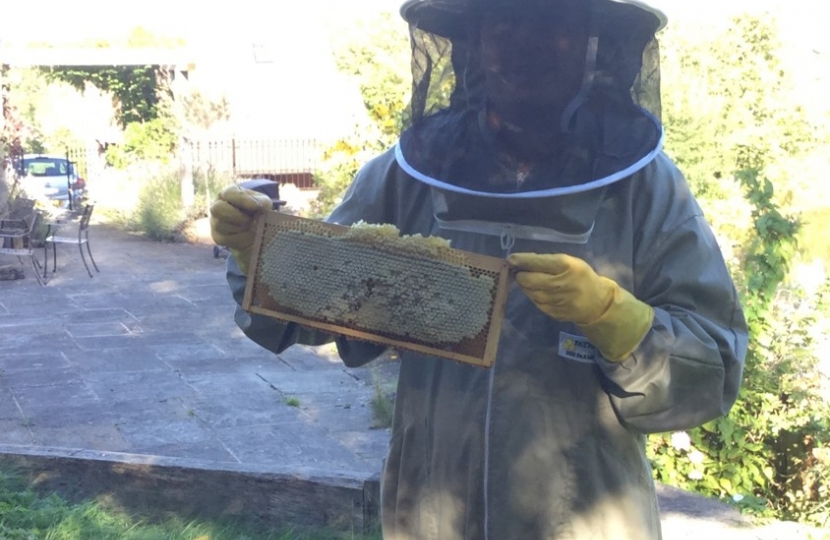 The use of neonicotinoids is a deeply important issue and one I worked closely on as Chair of the All Party Parliamentary Group on Bees and Pollinators.

Neonicotinoids are the most widely used class of insecticides in the world. Unlike other pesticides, which require harmful spraying numerous times a year when the crops are flowing and attracting pollinators, neonicotinoids protect the seed from pests via its coating.

Concern had been growing that neonicotinoids were causing harm to pollinators. Due to the difficulty in recreating the field conditions within a laboratory, this harm was difficult to prove with evidence. The findings from two comprehensive field studies provided the scientific evidence that neonicotinoids were likely to cause harm to bees and other pollinators. As a consequence, our APPG for Bees and Pollinators worked with the Government to ban the use of three neonicotinoids; clothianidin, imidacloprid and thiamethoxam This ban, from December 2017, envisaged that where there was an urgent need to use neonicotinoids, this could be permitted provided the benefits and mitigation outweigh the potential harm.

Following this general ban, there is a complex and stringent application process to acquire emergency, time limited (no more than 120 days) authorisation to use neonicotinoids in truly exceptional circumstances.

As you will be aware, the Government has provided an exemption and granted use on sugar beet seeds. You can find the Government’s full rationale for their decision to approve the limited use of neonicotinoid products as seed treatment for sugar beets here: https://www.gov.uk/government/publications/neonicotinoid-product-as-seed-treatment-for-sugar-beet-emergency-authorisation-application/statement-on-the-decision-to-issue-with-strict-conditions-emergency-authorisation-to-use-a-product-containing-a-neonicotinoid-to-treat-sugar-beet

I am aware that, in 2018, the Government rejected a previous application to allow neonicotinoid treatment on sugar beet seeds on the grounds that the risks to bees and the wider environment were too great.

In this instance, the Government has approved use with limitations. Part of this justification is down to the severity of beet yellows virus, which is spread by aphids, and part because sugar beet does not flower so is less likely to impact pollinators as a result. I am keen to see what the new evidence consists of. Whilst I accept that pollinators are less likely to interact with sugar beet, the comprehensive field studies indicated that it was the link between neonicotinoids and the water supply which could be triggering a reaction to pollinators (and not the flower or pollen).

I hold concerns about the use of the current range of neonicotinoids and will continue to work to ensure their application is only permitted in the most urgent situations. I very much hope that the manufacturers of these forms of pesticide will find a way to make them safe for use. As an alternative to spraying crops with pesticides many times each summer, they have great potential to aid ecology but more is needed before this can be so.

With this application, the Wildlife Trust is challenging the decision to provide this limited emergency use. I await with interest how this will be determined.

I hope this provides views and also my background with this particular campaign.